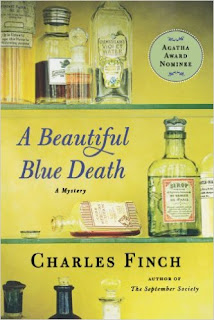 Synopsis: Charles Lenox, Victorian gentleman and armchair explorer, likes nothing more than to relax in his private study with a cup of tea, a roaring fire and a good book. But when his lifelong friend Lady Jane asks for his help, Lenox cannot resist the chance to unravel a mystery.


Prudence Smith, one of Jane's former servants, is dead of an apparent suicide. But Lenox suspects something far more sinister: murder, by a rare and deadly poison. The grand house where the girl worked is full of suspects, and though Prue had dabbled with the hearts of more than a few men, Lenox is baffled by the motive for the girl's death.

When another body turns up during the London season's most fashionable ball, Lenox must untangle a web of loyalties and animosities. Was it jealousy that killed Prudence Smith? Or was it something else entirely? And can Lenox find the answer before the killer strikes again―this time, disturbingly close to home?

(78)Review: Set in Victorian England this mystery has many twists and turns and well developed characters.  Charles Lenox is a bachelor in the upper levels of society who spends his free time trying to solve the mysteries of the Ton.

Charles Lenox would be happy if he could find a good pair of warm waterproof boots, have a nice fire, tea a good book and the company of his neighbor Lady Jane. However he always seems to get sucked in by a good mystery as an amateur detective. In this book Lennox with the help of his brother, footman, and a host of other colorful individuals Lennox struggles to find the killer of a maid whose murder looks like a suicide but could hold the key to a much larger deception.

Excellent read, I may be picking up more of these charming books.