Book Review: Anything for Amelia 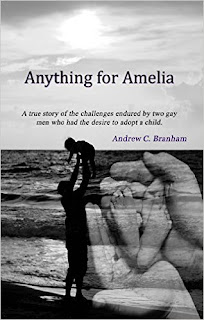 Title: Anything For Amelia: A true story of the challenges endured by two gay men who had the desire to adopt a child. by Andrew C. Branham
Publisher: First Edition Design Publishing
Format: Kindle
Pages: 209 pages
Genre: Adoption, memoir, lgbt

Synopsis: A true story of the challenges endured by two gay men who had the desire to adopt a child.

When Andrew and DJ decided to adopt and bring a child into their lives, little did they know what they were about to endure; yet never did the thought cross their minds to give up. The horrific, pitilessly, and beyond comprehensible hoops one woman would make them jump through demonstrates beyond a shadow of a doubt that little Amelia was going to be much better off in the loving home that Drew and DJ could provide her. Just when you think, how can two people survive such a nightmare and the journey is just about over when little Amelia is born and will be safely in the arms of her loving dads, Sandi decides to pull one more shenanigan that could change their lives forever.

Review: This book really drives home to me how using an agency instead of an adoption facilitator can help shelter families from women who try to take advantage of prospective adoptive parents. Andrew and his partner DJ used an adoption facilitator who matched them with a birth mother (Sandi) but most of the work was done by themselves with calls to their attorney.  They got paperwork signed, they set up meetings with their birth mother and her family and they didn't have anyone really looking out or protecting them from this demanding woman. In addition further along in the book you realize that their facilitator knew more about this woman than she told Andrew and DJ, there had already been an agency that had tried to put information out there about her manipulations and illegal actions with another family.


We can all look at Sandi with disdain for her manipulations and actions but this woman was smart and knew how to work the system.  She was manipulative, she lied, and she blackmailed, she was abusive to her children, to her boyfriend, and to pretty much everyone around her yet she survived and usually got her way.  I'm not saying she was a wonderful person but you have to give credit to her survival skills.

I think that there were many unrealistic expectations on the part of Andrew and DJ as well as Sandi on what to expect during the whole process and the facilitator didn't do enough to help them navigate this new relationship.  Throughout this book I was struck that Andrew and DJ considered this child theirs before termination even happened.  This is not a surrogate relationship, this was an adoption, and Sandi had rights, and the child she was carrying was hers until she signed her surrenders.  The fact that Andrew and DJ were posting on facebook that they were going to have a boy or a girl was disrespectful to Sandi and manipulative in its own way.  I understand that Andrew was worn down and angry with Sandi at the time he wrote this book but I feel the anger and disrespect he writes about her, his child's mother is inconsiderate of Amelia.  Even with all her faults this is the woman who carried and gave life to their daughter and that in itself should be enough to think about how this tale will effect his daughter when she is older, and I wonder how they speak of her to their daughter.

Even in divorce situations you are always cautioned against badmouthing the other parent. Andrew didn't just tell his story, he told Sandi's and he also told Amelia's.  If he was that concerned about Sandi's children he would have called Child Protective Services, or better yet why didn't the Adoption Facilitator? She should be a mandated reporter, so knowing everything that was going on she should have been obligated to make a call.  Andrew has stated in comments that he didn't call anyone because it may have jeopardized the adoption, that Amelia may have wound up with Sandi and while I appreciate that he wanted to save a child from her wrath, he and all the other adults in this situation allowed 4 children to suffer for months, which seems a little self serving and selfish.

I think that anyone reading this book would feel compassion for Andrew and DJ but I really wonder how will this book impact Amelia in the future? This negative, degrading description of her birth mother? This is a good cautionary tale and a good reason why using an agency to facilitate the adoption process and navigate the relationship between prospective adoptive parents and birth parents is a good idea, but I still feel that there were expectations and feelings on both sides that led this adoption down a dark path that could have been nipped in the bud early on.