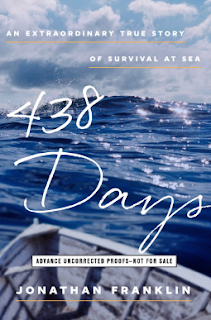 Title: 438 Days: An Extraordinary True Story of Survival at Sea by Jonathan Franklin
Publisher: Atria
Format: ebook was received from the publisher through netgalley.com in exchange for an honest review
Pages: 288 pages
Genre: non-fiction

Synopsis: On November 17, 2012, Salvador Alvarenga left the coast of Mexico for a two-day fishing trip. A vicious storm killed his engine and the current dragged his boat out to sea. The storm picked up and blasted him west. When he washed ashore on January 29, 2014, he had arrived in the Marshall Islands, 9,000 miles away—equivalent to traveling from New York to Moscow round trip.

For fourteen months, Alvarenga survived constant shark attacks. He learned to catch fish with his bare hands. He built a fish net from a pair of empty plastic bottles. Taking apart the outboard motor, he fashioned a huge fishhook. Using fish vertebrae as needles, he stitched together his own clothes.

He considered suicide on multiple occasions—including offering himself up to a pack of sharks. But Alvarenga never failed to invent an alternative reality. He imagined a method of survival that kept his body and mind intact long enough for the Pacific Ocean to toss him up on a remote palm-studded island, where he was saved by a local couple living alone in their own Pacific Island paradise.

Review: Based on hours of interviews with Alvarenga and his rescuers along with input from other people who have also survived long periods of time in tragic situations this book is a true tale of survival.  I wasn't hooked from day one but once that storm hit Franklin had me and didn't let go. Interspersed with the story are snippets of information from oceanographers, doctors, earth science specialists, and climate specialists which really added to the story by making it educational as well as entertaining.

No one else has ever survived that long at sea but somehow Alvarenga surived for 14 months adrift at sea.  He started out in Mexico and finally washed ashore in the Pacific Islands.  Finding fresh water and food was a daily struggle. The way in which Alvarenga kept his mind occupied and didn't completely lose hope was even more miraculous. Its amazing that he made it with his mind intact.

I have read many stories on survival but this tale will stick with me.  Alvarenga's will to survive and his extraordinary ingenuity really got him through in the toughest conditions. It really gives you a new perspective on life.