Book Review: Autobiography of an Assasin: The Here and Now 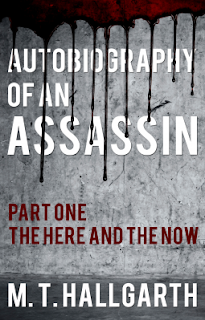 Title: Autobiography of an Assassin: Part One: The Here and the Now by MT Hallgarth
Publisher: Troubadour Publishing
Format: advanced e-copy received from the publisher in exchange for an honest review
Pages: 273 pages
Genre: Mystery Thriller

Synopsis: Beneath a seemingly pleasant and unpretentious façade lurks a ruthless predator...

Martin has an unusual life – he works as an assassin, having killed his first victim when he had only just turned sixteen. After fleeing to Belgium, he finds himself recruited by a mercenary organisation, more commonly known as ‘La Légion’. Given a new identity, Martin is taken to Morocco to undergo extensive training... training that is frequently brutal and bestial.

In Vietnam, Martin is recruited into ‘Section 9’, a covert organisation with the British Secret Intelligence Service. Upon discovering they want Martin to become an assassin, fate intervenes. On arriving back in London, he discovers feelings and emotions that he’s never experienced before – love and affection.

But nothing lasts forever...

When tragedy strikes, an assassin is truly born and overnight, Martin becomes a ruthless, heartless killer.

Interspersed were really interesting bits and pieces of a story that I wished the book would have been the focus instead of on the weapons.  Describing different missions that Martin and his family undertook. There was also a vivid description of the Manor house and how they came to obtain it, renovate it and find the secrets to it.  Those were the pieces that held my attention and I wish there were more of.

The next book in this series is Autobiography of an Assassin: The Family

Labels: Autobiography of an Assassin The hear and now