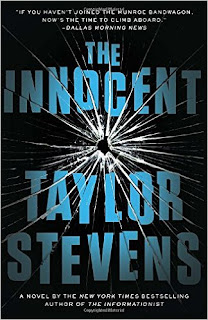 Synopsis: Eight years ago, five-year old Hannah was spirited out of school and into the closed world of a cult known as The Chosen. Ever since, followers of its leader have hidden the child and shielded her abductor. Now, childhood survivors of The Chosen who have escaped to make a life for themselves on the outside know here to find Hannah and turn to Vanessa Michael Munroe for help. Munroe reluctantly takes the job, and travels to Buenos Aires to infiltrate the cult and save the girl. Inducted in to a world unlike anything she has faced before, Munroe must navigate unpredictable members and their dangerous cohorts, the impatient survivors who hired her, and the struggle against her own increasingly violent nature so she can rescue the child before the window of opportunity closes and Hannah is lost forever.

Review: Its been a long time since I read the Informationist which is the first book in this series.  I do remember liking it and wanting to return to it so here I am a few years later.  Michael Munroe is a deadly chameleon. She can change her appearance, fluently speaks several different languages and knows how to blend in. Her expertise is information.

When her friend asks her to help get a child out of a cult she reluctantly takes the job. She is having a difficult time and is having nightmares that leave people in danger.  Hopefully she can suppress this long enough for her to find Hannah and get her out of the cult before she gets moved again.

I found myself a little lost on what the nightmares were about, maybe it was something that happened in the first book that I don't remember but her violent episodes were such a central part that I felt I was missing something. However it didn't take away from the overall story.  The Chosen are terrifying in the realistic portrayal of a religious cult and the way in which Michael infiltrates them is brilliant and simple.  The characters are well developed with many layers.

I don't think I will wait so long to read the next book in this series.