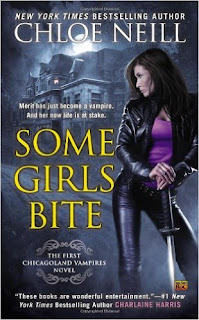 Sure, the life of a graduate student wasn’t exactly glamorous, but I was doing fine until Chicago’s vampires announced their existence to the world. When a rogue vampire attacked me, I was lucky he only got a sip. Another bloodsucker scared him off and decided the best way to save my life was to make me the walking undead.

Now I’ve traded sweating over my thesis for learning to fit in at a Hyde Park mansion full of vamps loyal to Ethan “Lord o’ the Manor” Sullivan. Of course, as a tall, green-eyed,
four-hundred-year-old vampire, he has centuries’ worth of charm, but unfortunately he expects my gratitude—and servitude. Right…

But someone’s out to get me. Is it the rogue vampire who bit me? A vamp from a rival House? An angry mob bearing torches?

My initiation into Chicago’s nightlife may be the first skirmish in a war—and there will be blood.

Review: I'm not sure why it took me so long to get to this series.  I've had books 1-3 sitting on my shelf for almost a year.  I finally picked it up the other day and couldn't put it down.  I love this world and I fell in love with Merit, her roommate Mallory and the host of other beautiful and crazy characters.  The hole that was left by the ending of Kim Harrison's Rachel Morgan series has now been filled with Chicagoland vampires.

This world is filled with political maneuvering from Merit's ambitious father, as well as the new vampire world she finds herself in.  While Merit was a bit of a geek as a human she is a very talented vampire.  Caught between hatred and love with the vampire who made her to save her life and now rules her house and is ultimately her boss, Merit often finds herself walking a thin line and having to play catch up to the vampire politics that have been around for centuries.

The characters all have multiple layers and are developed nicely.  The politics are fascinating and I can only see it getting more complex and intriguing.  This is a great start to a series and it definitely sucks you in (pun intended).  I expect that we will start to meet more species in the supernatural spectrum as the series goes on.