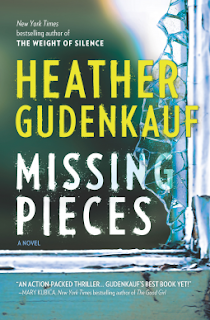 Sarah Quinlan's husband, Jack, has been haunted for decades by the untimely death of his mother when he was just a teenager, her body found in the cellar of their family farm, the circumstances a mystery. The case rocked the small farm town of Penny Gate, Iowa, where Jack was raised, and for years Jack avoided returning home. But when his beloved aunt Julia is in an accident, hospitalized in a coma, Jack and Sarah are forced to confront the past that they have long evaded.

Upon arriving in Penny Gate, Sarah and Jack are welcomed by the family Jack left behind all those years ago—barely a trace of the wounds that had once devastated them all. But as facts about Julia's accident begin to surface, Sarah realizes that nothing about the Quinlans is what it seems. Caught in a flurry of unanswered questions, Sarah dives deep into the puzzling rabbit hole of Jack's past. But the farther in she climbs, the harder it is for her to get out. And soon she is faced with a deadly truth she may not be prepared for.

This book grabbed me from the beginning.  It is filled with characters that just seem off.  Jack is distant and not forthcoming about what happened to his parents when he was a child, or pretty much anything else pertaining to his life before leaving Penny Gate.  His cousin Dean and wife Celia definitely seem to be hiding something and before you know it Sarah is entrenched in a decades old mystery.

Sarah was a very genuine character but I had a difficult time relating to Jack and many of the other characters who just seemed to be there to move around Sarah.  The mystery itself was very well done.  There are a lot of different pieces that are uncovered like peeling away an onion. I found myself flip flopping around about who I thought was actually the bad guy.

This was a quick read and had a very suspenseful ending that I really enjoyed.

Disclaimer: I received an advance copy of this book from the publisher through netgalley.com in exchange for an honest review