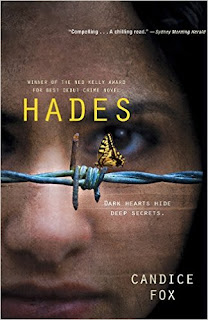 Twenty years ago, two children were kidnapped and left for dead.


Raised by a master criminal, they grew up to become cops. Very unusual cops . . .

Homicide detective Frank Bennett has an intriguing new partner. Dark, beautiful, coldly efficient, Eden Archer is one of the most enigmatic colleagues Frank has ever worked with—that includes her brother Eric, who’s also on the Sydney Metro police force. All of them are tested to the core when a local man discovers a graveyard of large steel toolboxes lying at the bottom of the harbor. Each box contains a grisly trove of human body parts.

For Frank, the madman’s clues are a tantalizing puzzle. For Eden and Eric, the case holds chilling links to a scarred childhood—and a murderous mentor named Hades. But the true evil goes beyond the bloody handiwork of a serial killer…

I read Eden (book 2) of this series last year and was so intrigued by it I had to go back and read Hades to see where it all started.  Hades is an intriguing character. When two young children are brought to him to dispose of he is very upset but when he finds out they are still alive he does the unthinkable, he decides to raise them.  Now they have become cops although both Eden and her brother Eric have rather unique personalities and hobbies.

Interspersed with a murder mystery is the story of Eden and Eric told from when Hades received them on his doorstep.  Book 2 tells Hades back story in a similar manner.  I am really enjoying the backstory on Eden and Eric and find the murder they are investigating chillingly viable.  Black market organ donation is a scary thought but what is even more disturbing is the people who feel that because they have the means they are more deserving. Makes you wonder who is the true monster in that case.

I am really happy I went back and read this book it really gave great insight into the characters and made the series stand out even more.  Loved it.