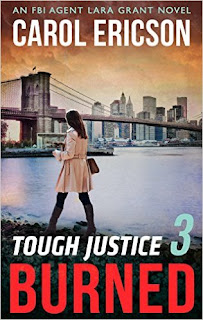 She burned Moretti…now it's his turn.

Destroying Moretti was Special Agent Lara Grant's biggest coup, but she paid a heavy price to make the bust. She'll do anything to keep him—and her secrets—behind bars.

But Lara knows he's playing the FBI like a maestro even from jail. So when her boss's daughter is kidnapped, it's personal…and not just for Lara.

With the team at breaking point, it's up to Lara to keep everyone focused. Until a chilling photo is delivered to her home address. Moretti knows where she lives. And he knows what she's hiding…

There is a rift forming between Lara and her partner Nick.  Nick knows she is hiding things but Lara won't tell him why or what.  While investigating it seems their killer is always one step ahead of Lara and her team and they know things that only a handful of people know. A secret so dangerous that Lara is terrified when she discovers that her secret now seems to be out.

I really liked this installment, I feel that the suspense really built but didn't feel rushed as it did in the last installment. There were a lot of mind games being played by Moretti and his gang, which made the book seem like I was watching a game of chess. This book moved very quickly and a lot of things were going on but somehow it seemed to come together very well.

Although I anticipated what the big secret was I found the way it was revealed was clever, I will be interested to see what the other authors do with it. Nick's role was significantly diminished in this book, in fact he was almost nonexistent, not sure if this author just wasn't sure what to do with him or if there is a plan for him in the future.