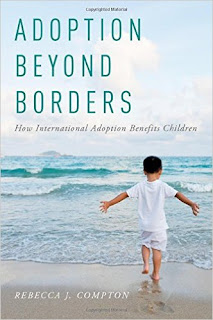 International adoptions have decreased dramatically in the last decade, despite robust evidence of the tremendous benefits that early placement in adoptive families can confer upon children who are not able to remain with birth families.

Topics include: the effects of institutionalization on children's developing brains, cognitive abilities, and socio-emotional functioning; the challenges of navigating issues of identity when adopting across national, cultural, and racial lines; the strong emotional bonds that form even without genetic relatedness; and the methods in which adoptive families can address the special needs of children who experienced early neglect and deprivation, thereby providing a supportive environment in which those children can flourish.

Rebecca Compton is a mother and psychologist who on her journey to adopt from Kazakhstan wound up staying in-country for almost a year and got to see firsthand the effects of institutionalization on children. Adoption Beyond Borders is a well-researched book that sites many studies that back up the obvious idea that children fare better in families than they do in institutions. International adoptions have dropped more than 70% since 2004. In that time the US has implemented the Hague Convention which is supposed to safeguard children from human trafficking among other things. The Hague sounds wonderful on paper but it was crafted and is based on information from non-governmental child welfare agencies who seem to have their own agenda and fear from countries of origin. There are not fewer children waiting in institutions across the world than there were before the Hague and there are not less families interested in adopting them. I liked how this book weaved together Compton’s adoption story with studies and observations. She backs up everything she says with research and really dives into how international adoption is actually in the best interest of children. By looking at cognitive abilities, socio-economic functioning, navigating identity and attachment there is no doubt that the current policies today are not helping children and in fact are harming them. My hope is that this book prompts people to take action to write to their government officials to start looking at the policies that were meant to help children which are in reality hurting them.

Disclaimer: Book was received from the publisher through netgalley.com in exchange for an honest review.
Labels: adoption adoption beyond borders rebecca j compton