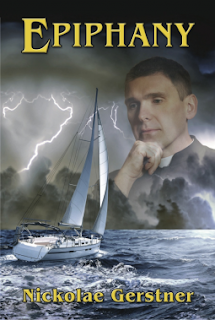 Philip Rockcastle discovers that an unimaginable crime paved the way for him to become a priest. Now pastor of a neighborhood church, is he doing what he was meant to do or is his life a mistake?

He feels responsible when his counseling efforts drive a mentally troubled parishioner to seek validation for fantasies by making a bogus confession to a murder. Troubled, he visits Tara, a divorced mother of two young boys. The visit is innocent. He is not in love with her. He tells himself that frequently.

When a mysterious young girl finally tells him her name, Philip is too shocked to believe, too hopeful to discredit.

The young girl and Philip's niece scheme to catch the actual murderer, but he catches them. For once in his life, Philip has no time to reflect. He must act.

Not a fan of the cover of this book which I feel really doesn't do the mystery or the story justice. Philip Rockcastle is a priest who is struggling.  His faith is being tested by a single divorced woman and the appearance of a young girl who claims to be his daughter who he thought died in an accident.

It is unclear whether she really is his daughter, I don't think they ever got DNA to prove it.  But while the priest struggles with staying a priest and rejoicing in the return of his daughter his niece and daughter are involving themselves in a murder mystery.

>The mystery is pretty good and the identity of the perpetrator is hidden until slightly before the end. At first Philip is invested in trying to free the people he feels are being wrongly prosecuted for a murder but when he discovers his long lost daughter his priorities start shifting. While his interest in the case starts to wane his nieces doesn't and the budding wanna be detective starts digging into the case.  Typical of any teenager she makes blunders along the way leaving her and her cousin in danger.

This book is a quick read and while I don't think I loved it as much as many reviewers on amazon, I did find it entertaining.

Disclaimer: This book was received from the publisher through netgalley.com in exchange for an honest review
Labels: Epiphany Nickolae Gerstner