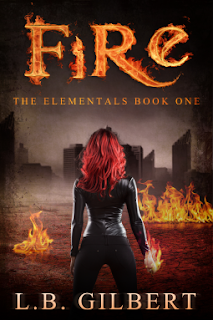 Invested with the powers of Mother Nature, four women have been charged with the almost impossible task of maintaining order in the supernatural world and—when the crimes are extreme—the human world as well.

Diana, a fire Elemental, is almost burned out. Alone in the world (save for her Elemental sisters), she takes satisfaction in punishing those who’ve strayed so far into the black they’ve disrupted the balance. But her contentment is increasingly short-lived as she struggles with the limitations of her ability. An Elemental can track murderers to the ends of the earth, but not before it’s too late for their victims.

So when a child from a previous case goes missing, Diana is determined to find her. The only problem is, she may have to take on an entire coven of vampires to do it.

This book grabbed me from the beginning.  Diana is a strong woman who doesn't easily trust anyone. She is powerful and often takes her job personally.   She is an Elemental who serves the mother.  Her and her sisters represent the four elements and are the police of the world.  They look for evil and darkness that throw off the balance of the world.  When they find it, it is their job to correct the imbalance.  When a young girl goes missing who Diana had helped once before goes missing it leads Diana to the doorstep of one of the strongest and oldest Vampire covens.

Alec, the heir to one of the strongest Vampire covens but has more interest in studying and research, is also a daywalker. He has come back to Boston to find the son of one of his servants.  Once Alec and Diana meet they realize their quests may be the same.

The characters really start to get fleshed out, through Alec's questions to Diana.  We learn more about Diana and more about Alec and his insatiable curiosity through their stories and questions.  Through their investigations into a black circle of witches Diana finds that having Alec around to help isn't as bad as she thought.

Very well done start to a new series, that introduces characters that are sure to be in future books which is nice.  Great fun book.

Disclaimer: Book was received from the publisher through netgalley.com in exchange for an honest review.
Labels: Fire LB Gilbert The Elementals