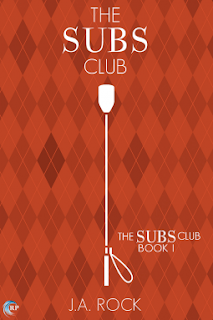 A year ago, my best friend Hal died at the hands of an incompetent “dom.” So I started the Subs Club, a private blog where submissives can review doms and call out the douche bags.

A perfect example of the kind of arrogant asshole I mean? The Disciplinarian. He has a pornstache. He loves meat, stoicism, America, and real discipline. And he thinks subs exist to serve him.

But . . . not everything about him is awful. His Davy Crockett act just seems like a cover for his fear of intimacy, and part of me wants to show him it’s okay to get close to people. And, I mean, sue me, but I have fantasized about real discipline. Not role-play, but like, Dave, you’re gonna be thirty in four years and you still work in a mall; get your ass in gear or I’ll spank it.

Not that I’d ever trust anyone with that kind of control.

I’m gonna redefine “battle of wills” for the Disciplinarian. Or I’m gonna bone him. It’s hard to say.

There is a lot of safety and negotiation talk in this book coupled with some hardcore spanking and punishment scenes.  David is very snarky and bratty and there are some really light hearted fun sections to this book which gave it a good balance.

David's battle of wills with the Disciplinarian was interesting.  Watching David go from having an agenda to prove that the Disciplinarian is an arrogant self serving Dom to realizing he may just be the right person to help him let go and move his life forward.

Disclaimer: Book was received from the publisher through netgalley.com in exchange for an honest review.
Labels: dom erotica master/slave S&M Subs