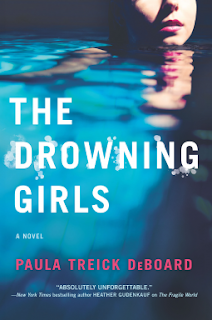 Liz McGinnis never imagined herself living in a luxurious gated community like The Palms. Ever since she and her family moved in, she's felt like an outsider amongst the Stepford-like wives and their obnoxiously spoiled children. Still, she's determined to make it work—if not for herself, then for her husband, Phil, who landed them this lavish home in the first place, and for her daughter, Danielle, who's about to enter high school.

Yet underneath the glossy veneer of The Palms, life is far from idyllic. In a place where reputation is everything, Liz soon discovers that even the friendliest residents can't be trusted. So when the gorgeous girl next door befriends Danielle, Liz can't help but find sophisticated Kelsey's interest in her shy and slightly nerdy daughter a bit suspicious.

But while Kelsey quickly becomes a fixture in the McGinnis home, Liz's relationships with both Danielle and Phil grow strained. Now even her own family seems to be hiding things, and it's not long before their dream of living the high life quickly spirals out of control…

The entire time I was reading this book I felt like I had read it before, but thats not possible.  So what was it.  I guess perhaps because I've seen movies just like it.  New family moves in, young beautiful unhinged Lolita takes and interest and befriends the daughter and things go downhill from there.

The Palms are a ritzy upper class community where everyone knows everything and if you don't fit in you are fodder for the rich and bored. Phil has just become the new community relations person for this community.  His family moves into a huge house on the property and try to fit in.

Strange things have been happening in The Palms, houses vandalized, bathrooms destroyed, but no one believes it could be one of their own who is involved.  It has to be an outsider.

I found the book to be a bit predicable with no real ending.  The rich and bored were cliche and Phil, Liz and Danielle a bit too naive. I could see how this would make good summer reading, but it just didn't do it for me. I wanted the characters a little more developed and a little less stupid. The character that seemed the most developed was really just the pawn to move the story but you didn't get to really interact with her a lot.  The chapters were divided between Liz and Phil who were just not that interesting.

Disclaimer: Book was received from the publisher through netgalley.com in exchange for an honest review.
Labels: drowning girls Paula Treick DeBoard