ARC Review: The Faces of Strangers by Pia Pudukone 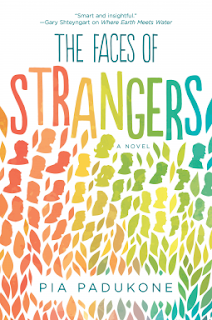 When native New Yorker Nicholas Grand applies for an international student exchange program, he thinks it's an opportunity to broaden his horizons and meet some interesting people. He never imagines that a single year would have repercussions that would follow him throughout his lifetime.

Nicholas is sent to Estonia, where he meets shy, sensitive Paavo, his beautiful sister, Mari, and their gruff father, Leo—a family grappling with the challenges of life in a small country struggling to assert its post-Soviet identity. Nicholas sets off on an unforgettable journey through a foreign landscape that ultimately teaches him that some bonds can never be broken.

There was so much to this book I'm not sure where to start a review.  The characters are all really well developed through different chapters.  While the characters may not all live in the same city their lives are all intertwined.  Through a student exchange program they learn so much about different cultures and themselves.  They see their strengths and weaknesses and that even weaknesses can be strengths in some instances.  Beautifully written, you grow up with Nico and Paavo as they move through adolescents and into adulthood.

The weakest points to the book were that the ending was told at the beginning so the end while still good was not as strong as it could have been.  I think not knowing what the answer to Paavo's riddle was at the beginning or even having been presented with his riddle at the beginning would have made for a stronger book.

Overall it is a good read and would make for great summer beach reading.

Disclaimer: Book was received from the publisher through netgalley.com in exchange for an honest review.
Labels: faces of strangers pia dadukone