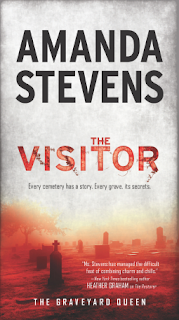 My name is Amelia Gray. I'm the Graveyard Queen.

Restoring lost and abandoned cemeteries is my profession, but I'm starting to believe that my true calling is deciphering the riddles of the dead. Legend has it that Kroll Cemetery is a puzzle no one has ever been able to solve. For over half a century, the answer has remained hidden within the strange headstone inscriptions and intricate engravings. Because uncovering the mystery of that tiny, remote graveyard may come at a terrible price.

Years after their mass death, Ezra Kroll's disciples lie unquiet, their tormented souls trapped within the walls of Kroll Cemetery, waiting to be released by someone strong and clever enough to solve the puzzle. For whatever reason, I'm being summoned to that graveyard by both the living and the dead. Every lead I follow, every clue I unravel brings me closer to an unlikely killer and to a destiny that will threaten my sanity and a future with my love, John Devlin.

This was a dark chapter in this series.  As Amanda learns more about her origins she finds that she is changing.  Her powers are growing and there may be more to her ghost seeing than she first thought. John Devlin also has some secrets in his family and they are starting to come to light.  Will this be the end of Amanda and John or can they stand together and fight the powers that are trying to pull them apart.

This book was unsettling. There were so many pieces of it that just gave me the creeps and while all of these books have a creep factor this one really is at the top.  If you haven't read the other books in this series you may not enjoy this one as much because the story really does build in each book.  I love how we are slowly unraveling Amanda's origins and now it seems we are starting to get a glimpse into John Devlin's family tree.  Both are equally unsettling but Amanda seems to be finding peace with her powers as they evolve even though they scare her. I'm not really sure what is going on in Johns family but there is something sinister lying in the wings. This book left you on a bit of a dark and foreboding cliff hanger which already makes me anxious for the next book in this series.  I hope it doesn't take as long for the next installment as it did for this one.

Disclaimer: Book was received from the publisher through netgalley.com in exchange for an honest review.
Labels: Amanda Stevens Amelia Gray Graveyard Queen