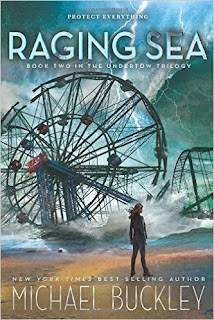 In the first book of Michael Buckley’s Undertow trilogy, the Alpha arrived and the world was never the same. At the start of the second book, most of south Brooklyn is in ruins and the nation is terrified. Nearly everyone that Lyric Walker loves is either missing or presumed dead, including the mesmerizing prince Fathom. It’s up to Lyric to unite the Alpha before the second wave of a cataclysmic invasion wipes out mankind for good.

This book picks up immediately after the first book ends.  There is no coddling or rehashing of book 1 so if you haven't read it you won't understand this one.  While many middle trilogy books often feel just like filler this one really had its own story.  It started out slowly and picked up like a wave on the ocean.

Lyric, and her friends are running - trying to find where Lyric's parents are being held. People keep telling Lyric that she is important. She doesn't quite understand but she starts to listen to the voices in her head. Fathom telling her to fight, her mother telling her she is more powerful than she imagines. That the glove isn't her only power.

I love Lyric and Bex.  Best friends who fight and keep each other from losing themselves in the chaos of what life has turned into.  Lyric has often succumbed to the glamour of using her new found power until Bex helps her find balance.

I found this book even better than Undertow, vivid imagery and great fast paced action.  Lyric is a wonderful, brave, strong female character.  She didn't want to be a hero, but she finds the role suits her.

Once again the narrator is brilliant in her telling, changing her voice for the different characters really engaging you in the story.
Labels: Alpha Fathom Lyric michael buckley raging sea undertow