Book Review: Give it Back By Danielle Esplin 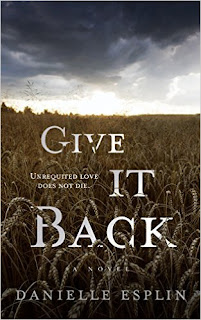 Not long ago, Lorraine lost her husband to another woman. She thought that's the worst thing that could happen to her, but soon she realizes it's only the beginning of an everlasting nightmare.

The au pair, Lexy, moves to Seattle to help Lorraine with her infant son. But she didn't come for the kids, she came for something else.

When Ella receives a call from her sister, Lorraine, who begs her to leave San Diego to spend time with her in Seattle, she thinks she will take a few days off from work. Frightened to see how her sister weakened since her diagnoses, she packs her small bag with a foreboding that this might be the last time she sees her.


But on her way to the airport she learns that something shocking had happened between the day she last spoke with Lorraine and the morning of the flight. Lorraine’s testimony changes, making Ella question how unreliable her sister really is.


Soon Ella is entangled in a mysterious investigation, and more so, in the lives of everyone involved. Not only will she realize that she won’t go home soon, but she will never look at others the way she did before.

Talk about edge of your seat! Esplin builds the suspense where you are feeling as desperate as the characters to find out what is really happening. Chapters are broken up by characters as we flip back and forth between modern day and the past to try to figure out what lead up to the big mystery.  Who is responsible? What happened?

Lorraine is battling cancer that traveled to her brain, we are unsure how much we can trust anything she says or does - is it her imagination or is it really happening.  I couldn't figure out if people were just setting her up or if she really was losing her mind.

Lexy, is an Au Pair from London who has no experience with children but is in the US for an entirely different reason.  However she finds that she likes helping Lorraine, Sam and Logan, or does she? Maybe its really just a set up.  The mind games in this book rival those in Gone Girl only these characters are likeable, well most of them anyway.

Ella is Lorraines sister and there is something weird about her.  She doesn't really want to come to Seattle to help her sister, she doesn't want to see her sick but once she does she finds herself not really knowing who to trust.  The police don't seem to be telling her everything, she isn't sure if her sister is in her right mind, Logan's father has a bit of a cloud hanging over him and your perception of his new wife flips back and forth between vindictive bitch to maybe she really does have some feelings.  I had a hard time grasping it.

With all these characters mixing around each other and a edge of your seat mystery I couldn't put this book down. When I realized I was only halfway through I wanted to cry, I needed to know what was really happening, the suspense was killing me. The book ends on a bit of a cliff hanger, I'm not sure if there is going to be a sequel or if we are just going to be left with questions about what is going to happen.

Labels: Danielle Esplin Give it back