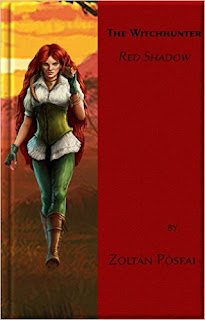 Conley Theron had been a lone witch hunter for centuries. Some events, he mostly erased from his memory, fuel his relentless hatred toward the witches that most of the world considers old tales. His mysterious longevity and immunity to witchcraft allowed him to become a prime predator. During his hunts, he finds traces of a witch who apparently slipped away from him for a long time. While investigating and pursuing her, the hunt takes a twist unexpected to both. The witch home world is threatened for the first time while the hunters motives and past start to crack.

I had a hard time connecting with this book.  Conley Theron relentlessly tracks down and kills witches regardless of whether or not they are fighting back or hurting others.  I couldn't pin down his motivation for this and perhaps if I had this earlier on I would have some connection to him but instead I found myself not really caring what happened to him until I was almost finished.  He was an unrepentant killer who had a single minded pursuit.

When Conley gets transported to another world while in pursuit of his prey, a red headed witch. He finds himself in uncharted territory but yet still possessed a narrow minded focused on killing the witch.  I don't know about you but if I found myself transported to another world I may have other objectives in mind, going home, surviving, things like that other than tracking her down and killing her.  Conley finds the inhabitants of this word strange and their Shaman seems to know way too much about his past and possibly even his future. While there he starts to remember more about his past and how he became to be what he is.

I think if the first half of this book had been shortened and we had gotten transported to the other world sooner it would have been better.  In the beginning I found myself connected to meaningless characters more than the main one. Somewhere in the last third of the book I found myself really invested in learning more about Conley because he seemed to be learning and changing. The ending got muddy again and I'm not really sure what happened.  I think this book has potential that was just never fully realized.

Disclaimer: Book was received from the author in exchange for an honest review.
Labels: Red Shadow The Witchhunter Zoltan Posfai