Skip to main content
Labels
Posted by Heidi (ReadingGrrl) May 27, 2016 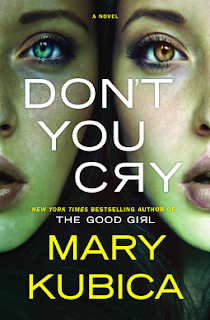 In downtown Chicago, a young woman named Esther Vaughan disappears from her apartment without a trace. A haunting letter addressed to My Dearest is found among her possessions, leaving her friend and roommate Quinn Collins to wonder where Esther is and whether or not she's the person Quinn thought she knew.

Meanwhile, in a small Michigan harbor town an hour outside Chicago, a mysterious woman appears in the quiet coffee shop where eighteen-year-old Alex Gallo works as a dishwasher. He is immediately drawn to her charm and beauty, but what starts as an innocent crush quickly spirals into something far more dark and sinister than he ever expected.

As Quinn searches for answers about Esther, and Alex is drawn further under Pearl's spell, master of suspense Mary Kubica takes readers on a taut and twisted thrill ride that builds to a stunning conclusion and shows that no matter how fast and far we run, the past always catches up with us in the end.


Fast paced with twists and turns this story tells the story of Quinn whose roommate Esther disappears one night and Alex the young boy whose father is the town drunk.  Alex stays in his small town taking care of his father and the agoraphobic woman who lives across the street from the diner where he works. One day a strange young woman catches his attention in the diner, as the two start to talk she becomes even more mysterious.

Quinn can't figure out where Esther went but finds strange things in her room that lead her to believe that she may not have known her roommate as well as she thought.  At first she just thinks Esther left, then she starts to believe there may have been more to her roommates disappearance than meets the eye, particularly when she finds her roommates phone.

While I figured out some of the puzzle pieces of this book the ending took me a bit by surprise.  The story was heartbreaking and mysterious and kept my attention. Very good read.

Disclaimer: Book was received from the publisher through netgalley.com in exchange for an honest review.
Labels: dont you cry mary kubica