Skip to main content
Labels
Posted by Heidi (ReadingGrrl) May 16, 2016

ARC Review: There Will Be Stars by Billy Coffey 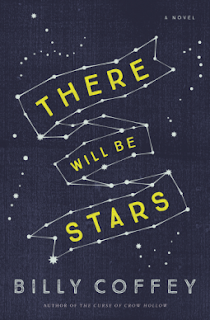 Only in death could Bobby Barnes begin to understand the true nature of love.

No one in Mattingly ever believed Bobby Barnes would live to see old age. Drink would either rot Bobby from the inside out or dull his senses just enough to send his truck off the mountain on one of his nightly rides. Although Bobby believes such an end possible and even likely, it doesn't stop him from taking his twin sons Matthew and Mark into the mountains one Saturday night. A sharp curve, blinding headlights, metal on metal, his sons' screams. Bobby's final thought as he sinks into blackness is a curious one—There will be stars.

Yet it is not death that greets him beyond the veil. Instead, he returns to the day he has just lived and soon finds he is not alone in this strange new world. Six others are trapped there with him.
Bobby soon discovers that rather than the place of peace he had been led to believe he was in, it's actually a place of secrets and hidden dangers. Along with three others, he seeks to escape even as the world around him begins to crumble. The escape will lead some to greater life, others to endless death . . . and Bobby Barnes to understand the deepest nature of love.


I wasn't sure what to expect with this novel, particularly after I looked it up on amazon and found that it is listed under Christian lit.  I'm not sure I agree with this.  What a fascinating book.  Bobbie Barnes is in a horrible car accident and when he wakes up he finds he is reliving the same day over and over, similar to the movie Groundhog day.  When he finds other people are trapped in this day, reliving it over and over but remembering what happened the last time,  he finds that no one really knows where they are.  Some call it Heaven some think its Hell, others just aren't sure but when strange things begin to happen and this afterlife starts falling apart they have to discover how to get out.  Some agree with him some just want things to go back to the way they were.

Really interesting take on what happens after death, how people cope, how their lives can change, and how people can find redemption.  You don't have to remain the same and change is a state of mind.  Even a small change creates big ripples in life.  I found the writing very easy to follow and Bobby is a very interesting man.  While so many think he is broken and horrible he is probably the most selfless and motivated person trapped.  By giving someone a chance or treating them with respect you can often change their life.  Just a really profound book that made me think about how my life touches others.

Disclaimer: I received an advanced reader copy of this book from the publisher through netgalley.com in exchange for an honest review.

I found this on facebook the other day and it totally reminds of me of this book. Change your ending.


Labels: Bill Coffey Bobby Barnes death life after death There will be stars