Skip to main content
Labels
Posted by Heidi (ReadingGrrl) May 10, 2016 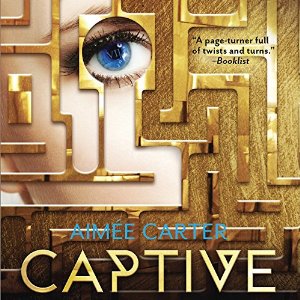 The truth can set her free.

For the past two months, Kitty Doe's life has been a lie. Forced to impersonate Lila Hart, the Prime Minister's niece, in a hostile meritocracy on the verge of revolution, Kitty sees her frustration grow as her trust in her fake fiancé cracks, her real boyfriend is forbidden and the Blackcoat rebels she is secretly supporting keep her in the dark more than ever. But in the midst of discovering that her role in the Hart family may not be as coincidental as she thought, she's accused of treason and is forced to face her greatest fear: Elsewhere. A prison where no one can escape. As one shocking revelation leads to the next, Kitty learns the hard way that she can trust no one, not even the people she thought were on her side. With her back against the wall, Kitty wants to believe she'll do whatever it takes to support the rebellion she believes in - but is she prepared to pay the ultimate price?

This book made me nuts.  I wanted to slap Kitty so many times, then I remembered she is only 17 was thrust into a political game that she doesn't know the rules of.  When I thought about that I realized how spot on the author was with depicting her.  However her constant battle of wills and arguing got to me, and I kept hoping that she would gain some maturity given the situations she kept getting thrust into.  I am having a hard time seeing what Benji sees in her, because I would have wanted to shake her and tell her to wake up several times.

The story itself however continues to be intriguing and there are some twists I didn't see coming.
I do believe that if it weren't for Benji and Knox I'm not sure I would keep up with this series after this book but I am interested in what will happen and I looked at reviews for the final book and they were mostly all positive.  So I will finish this series up and hope that Aimee Carter will turn Kitty into a heroine we can be proud of instead of the whiny, headstrong teen who doesn't trust anyone and always seems to need rescuing.