Skip to main content
Labels
Posted by Heidi (ReadingGrrl) May 11, 2016 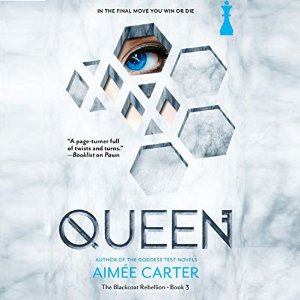 Kitty Doe is a Blackcoat rebel and a former captive with a deadly connection to the most powerful and dangerous man in the country, Prime Minister Daxton Hart. Forced to masquerade as Daxton's niece, Lila Hart, Kitty has helped the Blackcoats take back the prison known as Elsewhere. But Daxton has no intention of ceding his position of privilege - or letting Kitty expose his own masquerade. Not in these United States, where each person's rank means the difference between luxury and poverty, freedom and fear...and, ultimately, between life and death.
To defeat the corrupt government, Kitty must expose Daxton's secret. Securing evidence will put others in jeopardy, including the boy she's loved forever and an ally she barely trusts. For months Kitty's survival has hinged on playing a part. Now she must discover who she truly wants to be and whether the new world she and the rebels are striving to create has a place in it for her after all.


This book really pulled the whole series together and after my annoyance with the last book this was a refreshing change. I think Kitty really matures in this book, that isn't to say that she always goes along with the plan but I think she finally wakes up to her situation and the help or the hindrance that she can be.  As the war between the Black Coats and the government builds and ultimately gets resolved there is tension, tears and triumph.

The series Chess analogies were totally on point. The political maneuverings and schemes were endless and riveting.  Daxton always seems to be a step ahead of Kitty and Knox and I think that's what kept me coming back for more, to find out who finally wins.  Well done ending to this trilogy which had its issues in book 2 but Pawn and Queen really held this series together.