Skip to main content
Labels
Posted by Heidi (ReadingGrrl) May 06, 2016 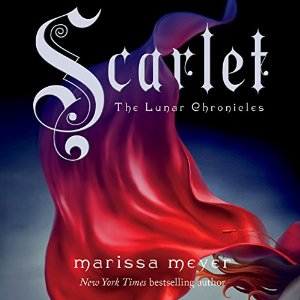 Cinder, the cyborg mechanic, returns in the second thrilling installment of the best-selling Lunar Chronicles. She's trying to break out of prison - even though if she succeeds, she'll be the Commonwealth's most wanted fugitive. Halfway around the world, Scarlet Benoit's grandmother is missing. It turns out there are many things Scarlet doesn't know about her grandmother or the grave danger she has lived in her whole life. When Scarlet encounters Wolf, a street fighter who may have information as to her grandmother's whereabouts, she is loath to trust this stranger, but is inexplicably drawn to him, and he to her. As Scarlet and Wolf unravel one mystery, they encounter another when they meet Cinder. Now, all of them must stay one step ahead of the vicious Lunar Queen Levana, who will do anything for the handsome Prince Kai to become her husband, her king, her prisoner.

The intrigue continues as Cinder escapes from prison to track down someone who may know something about her past.  Scarlet is going mad trying to find someone to help her locate her missing Grandmother. A stranger named Wolf, says he will help her but she is torn between trusting him and thinking he is part of the group that took her Grandmother away.

Prince Kai, now forced to take over his fathers role is overwhelmed. The girl he thought was just a simple Cyborg girl from the market turns out to be Lunar! He feels duped, and Queen Levana is threatening war if she doesn't get the Cyborg girl to take back to with her to execute.

So far this series is riveting.  I love the way Meyer blends these well known fairy tales into a modern political intrigue.  Brilliantly written with twists and turns.  While you know the fairy tales this take on them updates them and makes them come alive for a new generation.  These books do for Grimm's fairy tales what Wicked did for The Wizard of Oz.

Rebecca Soler is a brilliant narrator who changes her accents and voices so you know exactly who is speaking.  Well acted and entertaining.  This would make for a great long car ride listen.