Skip to main content
Labels
Posted by Heidi (ReadingGrrl) May 23, 2016

If you want to spark new ideas for worlds, plots or characters, you want Ideas and Inspiration for Fantasy and Science Fiction Writers. Medicinal corpses, the jargons of thieves and carnies, Nazi UFOs, the colonization of space and green children from nowhere are only a few of the topics covered. This sourcebook is for all writers of fantasy or science fiction--whether novels, short stories, games, or any other form of storytelling.

Ideas and Inspiration for Fantasy and Science Fiction Writers by James Hutchings was released March 2016 and can be purchased through: Smashwords, Amazon or DrivethruRPG 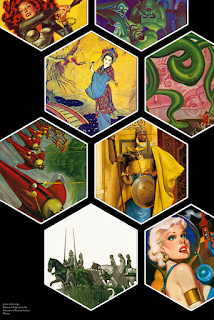 Here is an excerpt from the book:

Her father trained the court pages for King Louis XIV. She learned dancing, reading, drawing, and fencing alongside the pages. She dressed as a boy from an early age.

At fourteen, she became a mistress of the Count d'Armagnac who had her married to Sieur de Maupin of Saint- Germain-en-Laye. Soon after the wedding, her husband received an administrative position in the south of France, but Julie stayed in Paris.

Around 1687, she became involved with an assistant fencing master named Serannes. Serannes killed a man in a duel, and the pair fled for Marseille. On the way, the pair made a living giving fencing exhibitions and singing in taverns and fairs. D'Aubigny dressed in male clothing, but did not conceal her gender.

When they arrived in Marseille she joined an opera company, singing under her maiden name.

Bored with Serannes, she became involved with a young woman, until the girl's parents had her sent to a convent. D'Aubigny entered the convent, feigning interest in becoming a nun. She stole the body of a dead nun, placed it in her lover's bed, and set the room on fire, while the two escaped.

Their affair lasted for three months before the young woman returned to her family. D'Aubigny was charged in absentia, as a male, with kidnapping, body snatching, arson, and failing to appear before the tribunal. She was convicted, and sentenced to be burnt to death.

She left for Paris, again earning her living by singing. Near Poitiers, she met an old actor, who began to teach her until his alcoholism got worse and he sent her on her way to Paris.

In Villeperdue, still wearing men's clothing, she was insulted by a young nobleman. They fought a duel and she drove her sword through his shoulder. The next day, she asked about his health and found out he was Louis-Joseph d'Albert Luynes, son of the Duke of Luynes. Later, one of his companions came to offer d'Albert's apologies. She went to his room and subsequently they became lovers and, later, lifelong friends.

After Count d'Albert recovered and had to return to his military unit, Maupin continued to Rouen. There she met another singer, and began a new affair with him. They continued together towards Paris in the hope of joining the Paris Opera.

D'Aubigny contacted her former lover, Count d'Armagnac. He persuaded the king to grant her a pardon and allow her to sing with the Opera.

Julie sang regularly with the Opera. The Marquis de Dangeau wrote in his journal in 1701 that she had "the most beautiful voice in the world". She performed under the name Mademoiselle de Maupin since singers were addressed as 'mademoiselle' whether or not they were married. She assaulted the singer Louis Gaulard Dumesny after he pestered the women members of the troupe. She also fell in love with another singer who was the mistress of the Grand Dauphin. When this singer rejected her, Julie tried to commit suicide.

In 1695 she kissed a young woman at a society ball and three different noblemen challenged her to duels. She won all three duels, but fled to Brussels, since the king forbade duels in Paris. There, she sang in the Opera du Quai au Foin, and was briefly the mistress of Maximilian II Emanuel, Elector of Bavaria.

She returned to Paris in 1698. She and her friend d'Albert both had further trouble with the law: he for another fatal duel, and she for beating up her landlord.

She entered into a relationship with Madame la Marquise de Florensac. When the latter died, d'Aubigny was inconsolable. She retired from the opera in 1705 and took refuge in a convent, where she died in 1707, aged 33.

Disclaimer: This guest post was received by the author - the opinions expressed within this post are the authors and do not always match those of the blog owner.  This post is not an endorsement of the book or product but to provide others information.