ARC Review: The City of Mirrors: A Novel (book 3 of the Passage) by Justin Cronin 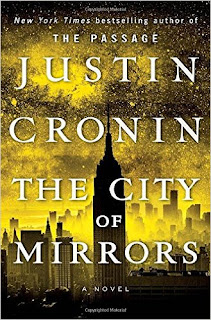 The world we knew is gone. What world will rise in its place?

The Twelve have been destroyed and the terrifying hundred-year reign of darkness that descended upon the world has ended. The survivors are stepping outside their walls, determined to build society anew—and daring to dream of a hopeful future.

But far from them, in a dead metropolis, he waits: Zero. The First. Father of the Twelve. The anguish that shattered his human life haunts him, and the hatred spawned by his transformation burns bright. His fury will be quenched only when he destroys Amy—humanity’s only hope, the Girl from Nowhere who grew up to rise against him.

One last time light and dark will clash, and at last Amy and her friends will know their fate.

I was so excited when I saw that the finale to this trilogy was out. Although there was so much time between the last book and this one that I found myself a bit lost in the beginning and thankful for the summary of what had happened so far at the beginning of the book.

Once I delved into the actual book I found that I was still a bit lost.  It skipped around a lot and then there was a long detailed history of Zero.  The man who started the virus that almost destroyed the human race. This part while interesting could have been shortened and while parts of it were important and very helpful to the story other parts of it I felt just droned on.

By about 1/2 way through the book and after Zero's story the pace picked up and I was reminded of the previous books and why I loved them so much.  While there was still a lot of skipping around to different characters I found it a little easier to follow and was riveted until the end.  There was a lot of action a lot of chess like moves and times when I was on the edge of my seat wanted to scream at the characters.  As I turned the last page I found tears on my cheeks. Brilliant ending to this series.

Disclaimer: Book was received from the publisher through netgalley.com in exchange for an honest review.
Labels: humanity Post apocolyptic survival vampires