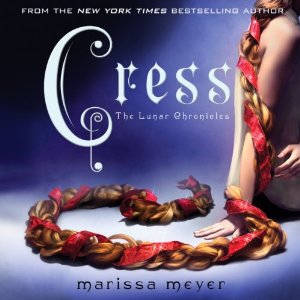 Cinder and Captain Thorne are fugitives on the run, now with Scarlet and Wolf in tow. Together, they're plotting to overthrow Queen Levana and prevent her army from invading Earth. Their best hope lies with Cress, a girl trapped on a satellite since childhood who's only ever had her netscreens as company. All that screen time has made Cress an excellent hacker. Unfortunately, she's being forced to work for Queen Levana, and she's just received orders to track down Cinder and her handsome accomplice. When a daring rescue of Cress goes awry, the group is splintered. Cress finally has her freedom, but it comes at a higher price than she'd ever expected. Meanwhile, Queen Levana will let nothing prevent her marriage to Emperor Kai, especially the cyborg mechanic. Cress, Scarlet, and Cinder may not have signed up to save the world, but they may be the only hope the world has.

This series just gets better and better.  I love the way Marissa Meyers reinvents these fairy tales. Cress takes on the tale of Rapunzel, with Cress being trapped in a satellite instead of a tower. I am also impressed with how all of these fairy tales come together to form a very cohesive and interesting new story.  Weaving throughout these fairy tales is a tale of politics, mystery, and intrigue.  I love the characters and the whole premise of this war between Earth and the Lunars.  Incredibly imaginative and refreshing.

Rebecca Soler as the narrator really captures each of these characters as their own person really involving you so much in the story that I started to forget I was just listening to it.  I was watching the action play across my eyes as if I had a netscreen implanted in my brain.  This book is as entertaining to listen to as the Harry Potter series. It would be great for a long car ride with kids, because it is not just entertaining for them it is just a well done series all together.