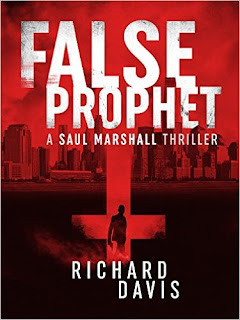 A psychotic terrorist has his son. He will do anything to save him.When a rogue cult turns deadly, the FBI call on former conman Agent Saul Marshall.


Marshall is soon drawn into a cat and mouse chase with the leader of the cult, Ivan Drexler. As the scale of Drexler’s terrorist ambition becomes ever clearer, news arrives that he has taken Marshall’s son hostage. Removed from the line of duty, he must work alone, off-grid. As the attacks intensify, Saul will stop at nothing to defeat Drexler.

But the FBI are questioning Saul’s own part in the carnage. He must work fast to save both his country and his life. Can Saul stop the carnage before it’s too late? And can he save his son?
As wave after wave of attacks break, the clock is ticking for Saul.

This book started out a little slow and confusing but about a 1/4 way in started to take off and didn't stop until the end. This is a book of political intrigue, espionage and graphic violence. Saul Marshall is a well developed character and many of the other supporting characters have really interesting back stories, and while the book doesn't delve too deeply into them it shows us how each of the characters are connected.

As you follow Saul on his hunt for his son and the man responsible for taking him I found myself identifying with Saul.  Understanding his motives. This for me makes a good book.  I did find myself a bit disappointed by the ending which I felt like ended a little too abruptly.  It felt a little rushed and a bit contrived.  Overall however I felt this was a good read with good pacing and enough intrigue to keep me on my toes.