ARC Review: And Then She Was Gone (A Detective Jack Stratton Novel) by Christopher Greyson 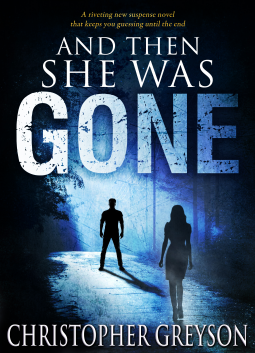 What's done in the dark will be brought to the light...

The silhouette stood at the edge of the woods like a spider watching a fly enter its carefully crafted web. Only a few more steps and she'd be within its grasp.

Stacy Shaw has her whole life ahead of her. New job, new house and now a baby on the way—everything she's ever hoped for is finally coming true. But on a warm summer night on the way home from work, she vanishes. The police race to find her, but the clues don't add up. Conflicting facts emerge as her story twists and turns, sending the trail spiraling in all directions.

A hometown hero with a heart of gold, Jack Stratton was raised in a whorehouse by his prostitute mother. Jack seemed destined to become another statistic, but now his life has taken a turn for the better. Determined to escape his past, he's headed for a career in law enforcement. When his foster mother asks him to look into the girl's disappearance, Jack quickly gets drawn into a baffling mystery. As Jack digs deeper, everyone becomes a suspect—including himself. Caught between the criminals and the cops, can Jack discover the truth in time to save the girl? Or will he become the next victim?


This book is a prequel to the Jack Stratton novels.  Focusing on Jack as a teenager as he seeks to find the killer of a young pregnant woman. Jack is constantly is putting himself and his friend/foster brother Chandler at risk of danger and also of being arrested.  Both Jack and Chandler are planning to go into the army and anything negative could screw up their chances but Jack just can't seem to help himself.  This is a great start to this series because it really gives you a feel for who Jack is and where he came from.  I haven't read the other books in this series but I just downloaded all 5 I was so intrigued by Jack and his family.

There is enough action to keep you interested, but also just the right amount of reality to keep the story grounded.  Jack isn't superman, he makes mistakes, he jumps to conclusions, he puts himself in situations that could prove dangerous but his motivation to help those who can't help themselves seems routed in his past.

I love Aunt Hattie, Jack's foster mother and also Jacks parents who took him in at the age of 11. The characters are so well written I had no problem seeing them in my head and watching them interact.
Really great start.  I'm looking forward to the other books in this series.

Disclaimer: I received an advanced copy of this book from the publisher through netgalley.com in exchange for an honest review.
Labels: And Then She Was Gone Christopher Greyson Jack Stratton mystery