ARC Review: No Place To Pray by James Carpenter 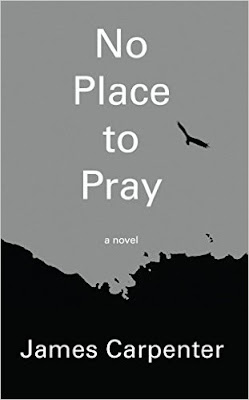 Two young men, one bi-racial and the other white, meet in an overnight lockup and begin their shared twenty-year downward spiral into alcoholism and homelessness. LeRoy and Harmon work together, drink together, brawl together, and as Harmon suffers from his final illness, they both bed Edna, a wealthy widow who, out of pity, curiosity, and loneliness, takes them into her vacation home by the river. Through episodes rendered from shifting, multiple points of view, a series of flashbacks, and LeRoy's adventure stories this very smart but uneducated man's attempts at fantasy writing we learn of the people and tragedies that shaped their lives and those whose lives unravel along with theirs at the seams of race, class, and religion, and where no one ever quite tells the truth.


In my opinion this was more about about class and friendship than race.  No matter their color both men are struggling to survive and often wind up in dangerous predicaments. We don't know much about Harmon's past but LeRoy came from a poor family, his mother was a whore and he didn't know his father. Harmon and LeRoy meet when they both wind up in the same cell one night.  That night forged a friendship that lasts the rest of their lives.

I actually had a hard time remembering that Harmon was supposed to be white and LeRoy black.  I often thought of them and their friends all being the same race until someone else brought it up and then I had to go back and think about how it would have been difficult given the time period. I'm not even sure that there was any mention of what race anyone was with the exception of LeRoy and his stepfather Whiskey.

The shifting time periods were interesting and really helped build a strong idea of who the men were and what was going on during that time. However because they were in a very rural setting it didn't even seem that many of the racial tensions of the time were as prevalent, it seemed that day to day survival was the biggest concern.

Disclaimer: I received an advanced copy of this book through netgalley.com in exchange for an honest review.