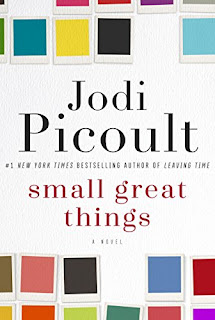 Ruth Jefferson is a labor and delivery nurse at a Connecticut hospital with more than twenty years’ experience. During her shift, Ruth begins a routine checkup on a newborn, only to be told a few minutes later that she’s been reassigned to another patient. The parents are white supremacists and don’t want Ruth, who is African American, to touch their child. The hospital complies with their request, but the next day, the baby goes into cardiac distress while Ruth is alone in the nursery. Does she obey orders or does she intervene?

Ruth hesitates before performing CPR and, as a result, is charged with a serious crime. Kennedy McQuarrie, a white public defender, takes her case but gives unexpected advice: Kennedy insists that mentioning race in the courtroom is not a winning strategy. Conflicted by Kennedy’s counsel, Ruth tries to keep life as normal as possible for her family—especially her teenage son—as the case becomes a media sensation. As the trial moves forward, Ruth and Kennedy must gain each other’s trust, and come to see that what they’ve been taught their whole lives about others—and themselves—might be wrong.

Timely and powerful I found this book really distressing to read but also fabulous and informative. Tackling the issues of privilege, racism, race bias, etc in a way that I think will open many eyes and lead to some really great discussions.  While people may think that the story line is not something that would actually happen in America unfortunately it does happen in real life.

Turk's story reminds me a little of the movie American History X with Edward Norton in that you get to see through the eyes of a white supremacist.  Its scary how people can be taught to hate so much, that history can be twisted in such a way, but its not a problem of yesterday, this is something that continues, and is systemic in the American culture and seems to be growing again.

Picoult's book couldn't have come at a better time and hopefully will get people talking and really thinking about racism, white privilege, and unconscious bias. Was Ruth guilty? Was she just following orders? What would you have done? And why did the hospital put her in this situation? Like all Picoult's books there is no easy answer, but maybe thats the point, there is no easy answer and fixing this is not going to be easy or comfortable for many.

Disclaimer: I received an advanced copy of this book from the publisher through netgalley.com in exchange for an honest review
Labels: jodi picoult race small great things