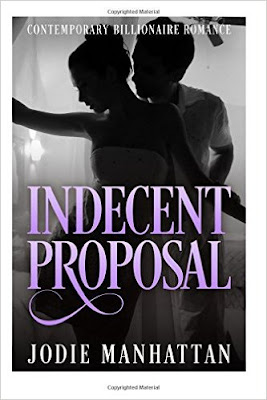 Evelyn thought that the smaller jobs were always just enough to fill her pockets, but with each robbery successfully ticked off, she had created quite a long list of pleased clients - and these things didn't go unnoticed by some.

A growing list of clientele lead to extra responsibilities, and extra responsibilities meant that there is no backing down when being presented with the chance of becoming a millionaire. In Jodie Manhattans irresistible debut contemporary romance novel, Indecent Proposal, Evelyn runs headlong into the night on a true make-it or break-it mission to retrieve the Dragon's Heart from notorious billionaire Armand Bronson's chateau in The Drives.

However after falling into an ambivalent bond with Armand, in which she cannot understand how she landed, someone from his past arrives.


Evelyn is a modern day Robin Hood, stealing from the rich to help out the poor neighborhood she grew up in.  Her main goal is to make enough money to move her family out of the projects and help her sister go to a better school. When she is hired to do a job that would pay her more than she ever dreamed and would be her final criminal endeavor she starts to cut corners and winds up caught.
Caught by billionaire Armand Bronson who seems like the party playboy but deep down just wants to be loved for more than his money.

This book was good, I really like Evelyn but I would have like to see her and Armands romance grow instead it just seemed to happen outside of all the other action. Even the ending seemed a bit rushed. There were some interesting characters, and there could be more to explore in this world, which with some work could morph into something akin to the _____ in death books by JD Robb.  I'm not sure if this is supposed to be a stand alone book or the introduction to a series but the ending left you dangling a bit and I could see Evelyn and Armand as a good team, him with the technology and money and her skills at breaking and entering.

Disclaimer: I received a free copy of this book from the author in exchange for an honest review.