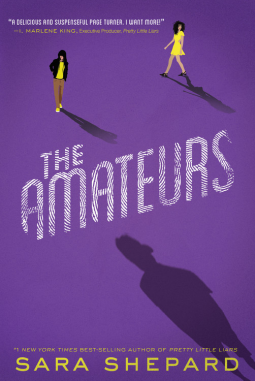 As soon as Seneca Frazier sees the post on the Case Not Closed website about Helena Kelly, she's hooked. Helena's high-profile disappearance five years earlier is the one that originally got Seneca addicted to true crime. It's the reason she's a member of the site in the first place. So when Maddy Wright, her best friend from the CNC site, invites Seneca to spend spring break in Connecticut looking into the cold case, she immediately packs her bag. But the moment she steps off the train in trendy, glamorous Dexby, things begin to go wrong. Maddy is nothing like she expected, and Helena's sister, Aerin Kelly, seems completely hostile and totally uninterested in helping with their murder investigation. But when Brett, another super user from the site, joins Seneca and Maddy in Dexby, Aerin starts to come around. The police must have missed something, and someone in Dexby definitely has information they've been keeping quiet. As Seneca, Brett, Maddy, and Aerin begin to unravel dark secrets and shocking betrayals about the people closest to them, they seem to be on the murderer's trail at last. But somewhere nearby the killer is watching . . . ready to do whatever it takes to make sure the truth stays buried.


You know what sucks about getting advanced copies of books? Having to wait longer for sequels! This book was great with a heart dropping doozey of an ending.  Sara Shepard hit this one out of the park for me.  Great characters with well developed backgrounds, and they are teenagers so they are grumpy, take things way too personally and get mad at the stupidest things.

Seneca and Maddy meet online in a amateur crime solving message board and Seneca agrees to help Maddy look into a case that Seneca has been obsessed with.  Turns out Seneca had a completely different vision of who Maddy was and is a little disturbed when they actually meet.  Joining them is Madison, Maddy's step-sister, Aerin, the sister of the dead girl and Brett another amateur sleuth from the message boards.  Together this band of kids piece together the last days of Aerin's sister and in the process put themselves right in the crosshairs of a killer and other people who don't want Helene's secrets revealed.

As Seneca unravels clues you start to wonder how you missed some of them along the way.  This book really draws you in and leads you down twists and turns that bring you joy then drop you like a roller coaster.  There is no lag time in this book but the pacing is not quick enough to give you pause as to how these kids were able to unearth all this new information.  Each of them plays a pivotal role in discovering the clues and unearthing major leads but Seneca seems to be the leader.

Something about this book brought me back to the books that helped me fall in love with mystery novels to begin with, the Encyclopedia Brown series, Nancy Drew and the Hardy Boys, something about a group of teens solving crime just makes me happy.

Disclaimer: I received an advanced copy of this book from the publisher through netgalley.com in exchange for an honest review.
Labels: detective mystery sara shepard The amateurs