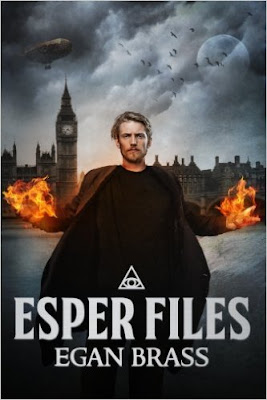 When an experiment goes wrong in Victorian London, Espers, people with supernatural abilities are created. In order to counter this new potential threat, the Institute is set up to teach Espers how to use their abilities for good and how to hunt down those who want to use their powers for evil.

Gifted with a formidable but self-destructive ability, Nathan is one of the Institute’s top agents. When the evil Baron executes his plan to control the minds of London’s political leaders, peace is dependent on Nathan and his team.

Will he learn to control his powers in time to save the world? Or will he succumb to their self-destructive nature?

This book is like a combination of X-men and the Flash.  Espers are humans who have obtained supernatural powers when an energy conductor blew apart.  The Professor responsible for creating the Espers has been ostracized and is now running the Institute where other Espers go to learn about their powers and also police those who use them for evil.

Nathan is a smart ass with an amazing ability (think Wolverine with the powers of Rogue).  He seems to be the only one who can help the young Esper who just discovered her powers and help her stop another the Baron from completing his evil task.

This world seems like a distant past and recent future combined so I'm going to say this had a very steam punk feel to it.  This was an entertaining book with lots of suspense and a bit of a cliffhanger of an ending.  The sequel to this book Esper Files: Sky Cult comes out January 25, 2016.

Disclaimer: I received a free copy of this book from the author in exchange for an honest review.
Labels: Egan Brass Esper Files special powers supernatural