ARC Review: Cover Me In Darkness by Eileen Rendahl 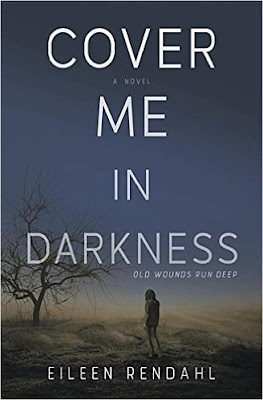 Amanda Sinclair has to fight harder than most for everything she has after fleeing the cult that left her brother dead at her mother’s hand. Amanda works a quiet job in quality control for a small cosmetics company, trying to leave her past behind her—until she learns that her mother has committed suicide in the mental ward where she’s been locked away for the past ten years.

At first, Amanda believes that her mother killed herself, but when she looks through the personal belongings left behind, it seems her death may be related to the upcoming parole hearing for cult leader Patrick Collier. Teaming up with her mother’s psychologist, Amanda starts to peel away the layers of secrets that she’s built between herself and her own past, and what she finds is a truth that’s almost too big to believe.

Amanda still struggles with the death of her baby brother at her mothers hands.  She sees him in dreams, blames herself for not saving him.  She has built a wall around herself to protect herself from the outside world, finding it hard to trust anyone after what her mother did.  She also blames the cult her mother was a part of, COGG, and now their leader is being paroled.

Just as Amanda starts to try to breach her walls and interact with people outside of work she gets a call that her mother committed suicide.  After that a series of weird events start leading her down a path of mystery.  Who would want to hurt her, how can she get them to believe her? The bodies start piling up and the lines between what is in her head and what is happened start to blur.

This is a frustrating mystery, where everyone seems like a suspect.  Who can you trust? Just when you think you have it pegged a new twist emerges.  This was a quick read because I couldn't put it down.  I needed to figure it out.  I really liked this book right up to the end when I felt like the conclusion was rushed. Had there been a little more substance to the ending I think it would have earned another star from me.

The writing is simplistic making it an easy read and one that even younger readers may enjoy.

Disclaimer: I received an advanced copy of this book from the publisher through netgalley.com in exchange for an honest review.
Labels: cover me in darkness cult eileen rendahl mystery