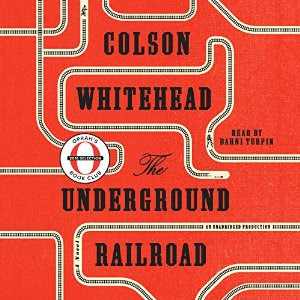 Cora is a slave on a cotton plantation in Georgia. Life is hell for all the slaves, but especially bad for Cora; an outcast even among her fellow Africans, she is coming into womanhood—where even greater pain awaits. When Caesar, a recent arrival from Virginia, tells her about the Underground Railroad, they decide to take a terrifying risk and escape. Matters do not go as planned—Cora kills a young white boy who tries to capture her. Though they manage to find a station and head north, they are being hunted.

In Whitehead’s ingenious conception, the Underground Railroad is no mere metaphor—engineers and conductors operate a secret network of tracks and tunnels beneath the Southern soil. Cora and Caesar’s first stop is South Carolina, in a city that initially seems like a haven. But the city’s placid surface masks an insidious scheme designed for its black denizens. And even worse: Ridgeway, the relentless slave catcher, is close on their heels. Forced to flee again, Cora embarks on a harrowing flight, state by state, seeking true freedom.


This is a very detailed book of the depravity, inhumane treatment and atrocities that were done to the African people who were stolen from their homes in Africa brought to the United States like cattle and bought and sold as possessions. How their children were ripped from their families and sold to pay off their Masters debts.  This book is brutally honest and may come as a shock and surprise to some who may have only learned whitewashed history in school.

While I really wanted to love this book from the start I did find the beginning a bit slow.  I wandered off a bit here and there but I'm not sure if that was due to the writing or the droning voice of the narrator. When Cora and Caesar ran away the book picked up.

The description of the hunters sent out to find runaway slaves, the different stations along the underground railroad etc were well done and interesting.  The medical experiments and mass sterilization projects on free men and women of color acting as if they were helping humanity, is despicable.  They may have been free but they were just as much in bondage. Terrifying and sad.

Bahni's narration was okay.  It was a bit droning and I did find myself drifting off a time or two but I wonder if it was the narration or the actual writing. Before Cora runs away I felt there were a lot of details that could really have been left out.