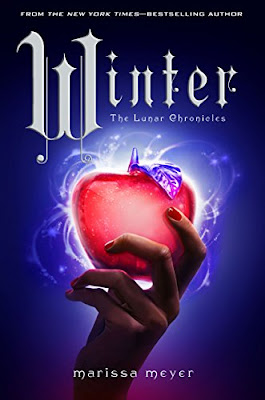 Winter despises her stepmother, and knows Levana won't approve of her feelings for her childhood friend--the handsome palace guard, Jacin. But Winter isn't as weak as Levana believes her to be and she's been undermining her stepmother's wishes for years. Together with the cyborg mechanic, Cinder, and her allies, Winter might even have the power to launch a revolution and win a war that's been raging for far too long.

Can Cinder, Scarlet, Cress, and Winter defeat Levana and find their happily ever afters?

This was an amazing ending to the Lunar Chronicles.  All of the story lines get wrapped up in a satisfactory way and yet the story kept you on the edge of your seat.  Meyer has an uncanny way of featuring the main character yet also giving all the other characters satisfactory time in which to evolve their story.

I am utterly enamored by these reinvented fairy tales. While many may see Winter as weak I saw her as a very strong character.  She denied her Lunar gift realizing that it would slowly drive her insane. She holds on to her sanity with the help of her guard Jacin. Despite her insanity Winter is very likeable and has a knack for getting people to like and trust her.  Maybe its because of her insanity that some feel sorry for her, or her beauty which is unmatched but I think it is more that they recognize the inner strength within her, the strength to survive being the Queen's step daughter, the strength to be kind to all despite that she grew up in the palace and the strength to not use her gift for even the littlest of glamours.

Being able to "see" Luna was also a big plus of this book.  All the other books take place on earth and finally we get to see Luna.  It was helpful to see the outside sectors and what Levana had done to her people to understand how much Cinder needed to win the rebellion.

Scarlet, Cress, Wolf,  Kai, Thorne, Iko and Cinder all have their own struggles in this book but they all come together, this band of misfits into some kind of family.  They look out for each other despite their differences.

This is a great book to listen to, Rebecca Soler does a great job of changing her voice to make each character unique.  She brings you into the story so you get lost in the narrative. Very well done.