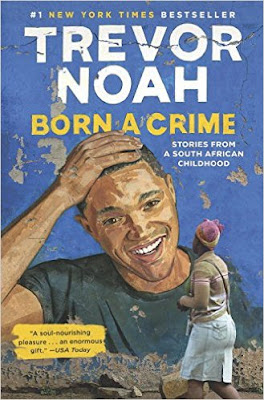 Trevor Noah’s unlikely path from apartheid South Africa to the desk of The Daily Show began with a criminal act: his birth. Trevor was born to a white Swiss father and a black Xhosa mother at a time when such a union was punishable by five years in prison. Living proof of his parents’ indiscretion, Trevor was kept mostly indoors for the earliest years of his life, bound by the extreme and often absurd measures his mother took to hide him from a government that could, at any moment, steal him away. Finally liberated by the end of South Africa’s tyrannical white rule, Trevor and his mother set forth on a grand adventure, living openly and freely and embracing the opportunities won by a centuries-long struggle.

Born a Crime is the story of a mischievous young boy who grows into a restless young man as he struggles to find himself in a world where he was never supposed to exist. It is also the story of that young man’s relationship with his fearless, rebellious, and fervently religious mother—his teammate, a woman determined to save her son from the cycle of poverty, violence, and abuse that would ultimately threaten her own life.


I was really excited about getting this book and I toyed around with either buying the book or listening to the audio.  Once I realized that Trevor Noah actually narrated the book I had to get the audio.  To hear him tell the stories of his childhood and apartheid with his South African accent and to listen to him speak Zulu, and Xhosa, Afrikaans and other South African dialects is worth the listen. I'm not sure they would have had the same impact if I had just read the words on the page.

This book is about growing up at a time when he could have been taken away from his mother due to his very biology.  The way they had to walk down the street, the times when his mother denied being his mother to protect him, even though he may not have understood and ultimately the strong bond between a mother and a son.  His stories are of South Africa and not fitting in anywhere, of Apartheid, and the brilliance of how the government divided a country that is still struggling against it, and of just being an awkward kid and trying to find his way through the world.   His stories had me laughing, crying, gasping and I found it difficult to stop listening.  I was totally enthralled by his story telling and I could have listened to him go on and on.