Book Review: A Time of Torment (A Charlie Parker Novel 14) by John Connelly 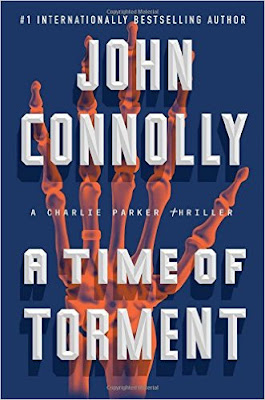 Jerome Burnel was once a hero. He intervened to prevent multiple killings, and in doing so destroyed himself. His life was torn apart. He was imprisoned, brutalized.
But in his final days, with the hunters circling, he tells his story to private detective Charlie Parker. He speaks of the girl who was marked for death, but was saved; of the ones who tormented him, and an entity that hides in a ruined stockade.
Parker is not like other men. He died, and was reborn. He is ready to wage war.

Now he will descend upon a strange, isolated community called the Cut, and face down a force of men who rule by terror, intimidation, and murder.

I love these books they keep getting creepier and more mystical.  I'm not sure where they are leading but Charlie is not a normal PI and ever since his last encounter with death he has changed. If anything he seems more deadly which is hard to believe.

In this book we learn a tiny bit more about his daughter as well. We knew there was something different about her but this one really shows that there is a whole lot more to this girl than anyone thought.  But not being normal might be a good thing when you are Charlie's daughter.

The Cut is an isolated community within a small county they don't like outsiders and are pretty much self sustaining, but if you cross any of them there is no where you can hide that they can't find you and once they do its unpleasant.  They have a leader but they really follow the Dead King of which most people know little about.

As usual this is a well written book with some interesting characters.  Charlies mission it seems is to avenge the dead or the wrongly accused.  His sidekicks Angel and Luis don't have there usual lively banter in this one but their presence is always fun to watch as they interact with other people.

I am utterly enamored by these books and they just keep getting better. They are almost difficult to review because they are just so fabulous. Connelly has really created a very interesting supernatural world that lives within our world.  They look just like us but hide something deeper.