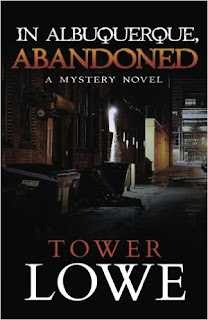 Leon wants to rescue a baby abandoned in a dumpster in Albuquerque, New Mexico. His brother, Booth, is killed before Leon has a chance to get the baby. Did Leon kill his brother in order to save the baby? Is there a baby? In this noir crime story, Cinnamon and Burro unravel a closely woven secret, beguile a neurotic police officer, and assist a man with schizophrenia badly in need of treatment. Strange characters with odd habits abound. All the while, Burro uses his visions to search for the baby, the killer, and the long lost Momma, who appears and then disappears from view.

I have not read the other 6 books in this series and I'm thinking that this book may have made more sense if I had.  I feel like I was dumped into the middle of a mystery with people who acted like they knew me and I had no idea who they were.

Leon has been diagnosed with schizophrenia, lives with his brother and his wife and has recently been found every morning in the dumpster outside a school trying to find a baby that he insists is lost.  Cinnamon and Burro are private investigators, who are called in to try to find out the mystery of the baby and try to get Leon to stop coming to the dumpster.  Burro is a diagnosed schizophrenic as well but isn't medicated and gets visions of things that are happening or going to happen.  I don't know much about Cinnamon other than she is looking for her mother, who after much confusion I realize has the same name.

This book felt very disjointed and confusing.  Fifty percent of the book was focused on Leon and his dumpster diving for babies and why he thinks there may be a baby there and the cop who shows up every morning to stop him and is increasingly getting more aggressive.

It wasn't until I passed that fifty percent mark that pieces started falling into place about Leon's brother and some other characters selling artifacts from a museum on the black market.  And Cinnamon's mother keeps popping up in strange places but doesn't really fit the story.

This story had a lot of potential but there needed to be some back story on the characters and a faster move toward what was really happening in this small town. I liked the character of Burro but I didn't get enough of a feel for Cinnamon other than she wanted to find her mother.  I almost stopped reading but I hate doing that so I plowed forward and the second half of the book was much better. There were some typo's and grammatical things that could have used an editor but overall the story was good but the delivery needed some work.  Maybe I would have felt different had I read some of the previous books in this series.

Disclaimer: I received this book free from the author in exchange for an honest review.
Labels: Cinnamon Burro mystery Tower Lowe