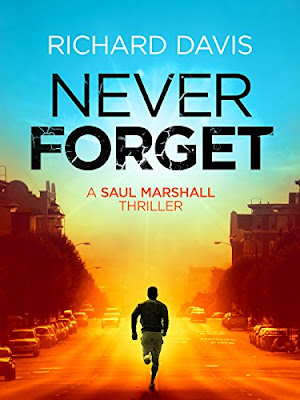 Saul Marshall is on the run.
As a wave of seemingly random assassinations engulfs California, Marshall finds himself drawn into a situation spiraling out of control. He soon discovers some of the webs’ most secure protocols have been compromised by a rogue team of former Chinese agents. When Marshall realizes what they plan, the stakes are raised… And that’s before the Secretary of State gets involved. Can Marshall unravel the deceit and tricks before it’s too late? Can he stop the carnage, or will he become part of it? One thing is for certain: either way his enemies will never forget.

Richard Davis got it right from the start on this one.  This book immediately hooked me from the beginning this book is a race to the finish.  Filled with political intrigue and cyber security Never Forget takes you down the path of hackers and terrorists. As our last political election proved cyber attacks are becoming more frequent and are being used to infiltrate governments and cause upheaval.

I liked Saul Marshall in the first book False Prophet and I still like him.  Ex-FBI who has his own moral compass. His back story was explained as we learned along with the woman he saved Ellen Kelden. We learned more about Saul's past as a con man and I actually can't wait for more stories from his past.  Davis really develops his characters and it seems that we may be seeing more of some of them again.

Davis has found his stride and taken all of the reviewers critiques of his first book into account and developed a solid well written book that still leaves you wanting more.  From beginning to end this is a great thriller and I was really happy and pleasantly surprised.

Disclaimer: I received a free copy of this book from the author in exchange for an honest review.
Labels: China Richard Davis Saul Marshall