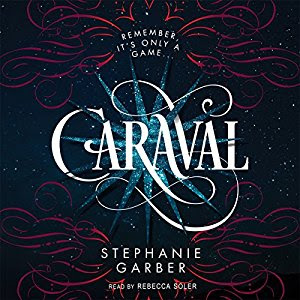 Scarlett has never left the tiny island where she and her beloved sister, Tella, live with their powerful - and cruel - father. Now Scarlett's father has arranged a marriage for her, and Scarlett thinks her dreams of seeing Caraval, the faraway once-a-year performance where the audience participates in the show, are over.

But this year Scarlett's long dreamt of invitation finally arrives. With the help of a mysterious sailor, Tella whisks Scarlett away to the show. Only as soon as they arrive, Tella is kidnapped by Caraval's mastermind organizer, Legend. It turns out that this season's Caraval revolves around Tella, and whoever finds her first is the winner.

Scarlett has been told that everything that happens during Caraval is only an elaborate performance. But she nevertheless becomes enmeshed in a game of love, heartbreak, and magic with the other players in the game. And whether Caraval is real or not, she must find Tella before the five nights of the game are over, a dangerous domino effect of consequences is set off, and her sister disappears forever.

Scarlett has been obsessed with stories of Caraval and has been writing to Legend the head of the Caraval for years begging him to come their small island but she has never received an answer until now.  Days before her arrange marriage Scarlett and her sister Tella travel to attend the show but as soon as they get there Tella disappears and has become the object of the "game". Now Scarlett and everyone is trying to find her.

During the quest to find her sister Scarlett also needs to find herself, her strength and her power.  Her father is an abusive evil man and Legend has a long twisted past with her family that may be her undoing. Engaged to a man who she has never met but she feels is her only way to get away from her horrible father and save her sister, Scarlett needs to find the strength to stand on her own instead of being so afraid, that may be the only way to truly save her sister...and herself.

With lots of twist and turns this story holds your attention keeps you on your toes and keeps you interested. However this is a very dark story and may not be for all YA readers.  Descriptive with an intricately woven story I really found myself lost in the action.

Narrator Rebecca Soler also narrated the Cinder Series by Marissa Meyer and I loved her reading so much it lead me to this book and I was not disappointed.