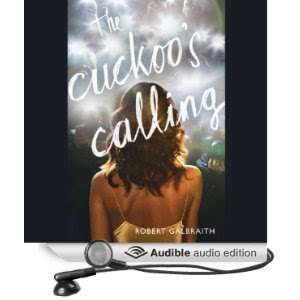 After losing his leg to a land mine in Afghanistan, Cormoran Strike is barely scraping by as a private investigator. Strike is down to one client, and creditors are calling. He has also just broken up with his longtime girlfriend and is living in his office.

Then John Bristow walks through his door with an amazing story: his sister, the legendary supermodel Lula Landry, known to her friends as the Cuckoo, famously fell to her death a few months earlier. The police ruled it a suicide, but John refuses to believe that. The case plunges Strike into the world of multimillionaire beauties, rock-star boyfriends, and desperate designers, and it introduces him to every variety of pleasure, enticement, seduction, and delusion known to man.
You may think you know detectives, but you've never met one quite like Strike. You may think you know about the wealthy and famous, but you've never seen them under an investigation like this.

I decided to read this based on the description of the story, it wasn't until I was almost finished that I found out that Robert Galbraith is the pen name of JK Rowling.  I'm almost glad I didn't know before hand so it didn't cloud my judgement.  I really love Harry Potter but they are very different books than Cuckoo's Calling.

Cormoran Strike is a flawed detective who is hired to investigate the death of a celebrity.  Despite his famous father Strike is anything but part of the "in" crowd.  Investigating the suicide of Lula Landry Strike finds himself immersed with celebrities and high fashion. He is a tall imposing man who is down on his luck but seems to be making due. He knows how to read people and is very good at his job and his luck seems to be taking a turn for the better.

Strikes new temporary secretary Robin is intrigued by detective work and by Strike.  Her job was supposed to be temporary but she begins to make herself indispensable to Cormoran and despite her fiances objections to her working for Strike she takes a full time position as his secretary.  I really liked Robin, she is a strong capable woman who really wants to help and get into detective work.

This book kept me interested and eager to listen.  I don't know if this was a product of the narrator or the actual book but either way it was very entertaining.  This is a good old fashioned detective novel and I loved it.  I have already downloaded the 2nd book in this series.  I think the narrator makes or breaks audio books and Robert Glenister is a fabulous voice actor. He changes his voice to the different characters really allowing you to become immersed in the story.