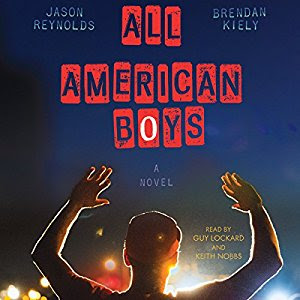 Two teens - one black, one white - grapple with the repercussions of a single violent act that leaves their school, their community, and ultimately the country bitterly divided by racial tension.

A bag of chips. That's all 16-year-old Rashad is looking for at the corner bodega. What he finds instead is a fist-happy cop, Paul Galluzzo, who mistakes Rashad for a shoplifter, mistakes Rashad's pleadings that he's stolen nothing for belligerence, mistakes Rashad's resistance to leave the bodega as resisting arrest, mistakes Rashad's every flinch at every punch the cop throws as further resistance and refusal to STAY STILL as ordered. But how can you stay still when someone is pounding your face into the concrete pavement?

But there were witnesses: Quinn Collins - a varsity basketball player and Rashad's classmate who has been raised by Paul since his own father died in Afghanistan - and a video camera. Soon the beating is all over the news, and Paul is getting threatened with accusations of prejudice and racial brutality. Quinn refuses to believe that the man who has basically been his savior could possibly be guilty. But then Rashad is absent. And absent again. And again. And the basketball team - half of whom are Rashad's best friends - start to take sides. As does the school. And the town. Simmering tensions threaten to explode as Rashad and Quinn are forced to face decisions and consequences they had never considered before.

This is a powerful book that speaks to the violence and racial tension that exists today.  If you ever wondered if black and white kids have the same experiences in High School this story will let you know they don't. Told by Rashad a black high school student and Quinn a white high school student. Quinn witnesses the beating of Rashad by a white cop and struggles to decide what to do with his information.

This is not an easy book or an easy topic but this book tackles it with accuracy and grace. It should be required reading for all students.  This really shines a spotlight on the differences that two boys in similar situations both with dreams and hopes have to deal with. This book helps to challenge us on our biases and really shows white privilege.  Do we judge people on the way they look? On how they dress? Change Rashad's religion to Muslim would it make a difference? What if the cop was black? This book definitely makes you think and would be great to start a conversation on race.

The narrators really gave these two kids life.  They were perfect and I found myself lost in the story.