Skip to main content
Labels
Posted by Heidi (ReadingGrrl) May 29, 2017 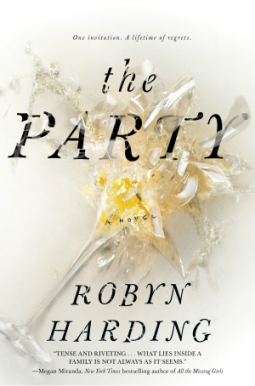 Sweet sixteen. It’s an exciting coming of age, a milestone, and a rite of passage. Jeff and Kim Sanders plan on throwing a party for their daughter, Hannah—a sweet girl with good grades and nice friends. Rather than an extravagant, indulgent affair, they invite four girls over for pizza, cake, movies, and a sleepover. What could possibly go wrong?

But things do go wrong, horrifically so. After a tragic accident occurs, Jeff and Kim’s flawless life in a wealthy San Francisco suburb suddenly begins to come apart. In the ugly aftermath, friends become enemies, dark secrets are revealed in the Sanders’ marriage, and the truth about their perfect daughter, Hannah, is exposed.

Teenagers always seem to get themselves into things they have no idea how to get out of.  That being said I thought the plot of this book was very realistic and I could totally see this happening. For decades teenagers have been sneaking booze into parties, boys and getting into situations that could be potentially dangerous.

The relationship between the teenagers and the drive to be part of the "in" crowd was never my thing or my kids thing so its hard for me to relate to it but I have seen it and seen how intimidating it can be for kids who strive to "fit in". So while these relationships seemed superficial and mean I also found them to be realistic.

I hated Kim, her controlling, greedy and superficial holier than thou attitude reminded me of so many of the women in my area.  This need to be perfect and appear to have the perfect life makes me sick. Her judgement of everyone around her and her inability to see her daughter growing up and need to be treated differently made her shallow and aggravating to me. Jeff just seemed like a beaten puppy desperate to be liked.  His wife is overly controlling and the "incident" that ruined her trust in him was not ideal but it wasn't like she caught him in an affair.  I felt she really dragged out the disappointment in him to extremes and it was really based on a whole lot more than just the "incident".

Lisa the mother of one of the girls at the party is another character that was hard to like. She started out as likable and quickly deteriorated into greed and pettiness.  It was another example of taking things to the extreme with no acknowledgement that her daughters behavior contributed to what happened.

Overall this book is worth reading and was well written.