ARC Book Review: Before We Were Yours by Lisa Wingate 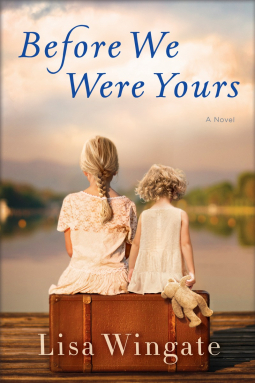 Memphis, 1939. Twelve-year-old Rill Foss and her four younger siblings live a magical life aboard their family’s Mississippi River shantyboat. But when their father must rush their mother to the hospital one stormy night, Rill is left in charge—until strangers arrive in force. Wrenched from all that is familiar and thrown into a Tennessee Children’s Home Society orphanage, the Foss children are assured that they will soon be returned to their parents—but they quickly realize that the truth is much darker. At the mercy of the facility’s cruel director, Rill fights to keep her sisters and brother together—in a world of danger and uncertainty.

Aitken, South Carolina, present day. Born into wealth and privilege, Avery Stafford seems to have it all: a successful career as a federal prosecutor, a handsome fiancé, and a lavish wedding on the horizon. But when Avery returns home to help her father weather a health crisis, a chance encounter leaves her with uncomfortable questions—and compels her to take a journey through her family's long-hidden history, on a path that will ultimately lead either to devastation . . . or redemption.


This was a really interesting story based on America's most notorious and scandalous woman Georgia Tann who kidnapped children from poor families and sold them to wealthy families all over the country.  She had politicians, judges and attorneys in her corner but her and her cohorts actually terrorized, molested, and murdered an unbelievable number of children. Her unfortunate legacy still holds precedent over adoption legislation today such as closed adoption records.

Wingate tells Tann's story from the point of view of some of the kids who were stolen and the impact her blackmail, lies and kidnapping had on families.  With alternating chapters you learn the story of Rill and her siblings and parents from their point of view and from the view of one of the granddaughters who is desperately trying to uncover what her grandmother has tried so hard to hide.

Your heart will break for Rill, her siblings and her parents Briny and Queenie whose whole world was destroyed by Tann. Avery Stafford is a granddaughter of one of the stolen children, raised in privilege her father is a senator and she is being groomed to take his seat when he vacates it. But she isn't sure she wants it.  There are really 2 stories here..with a common theme of lives that are decided for them instead.

I really enjoyed this book although I did find it a bit difficult to figure out who the modern characters were compared to the ones from the past.  Tann liked to change the children's names making it harder for their biological families to find them and it was difficult to figure out who each character was from the past. Eventually I figured it out and there was an aha moment when I figured out how Avery's grandmother fit.

If you want to read more about Tann try The Baby Thief by Barbara Bisantz Raymond.