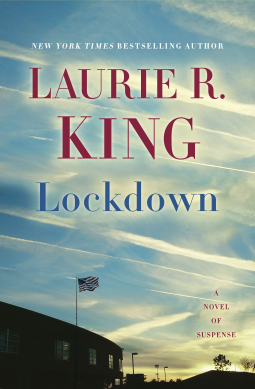 Career Day at Guadalupe Middle School: A day given to innocent hopes and youthful dreams. A day no one in attendance will ever forget.

A year ago, Principal Linda McDonald arrived at Guadalupe determined to overturn the school’s reputation for truancy, gang violence, and neglect. One of her initiatives is Career Day—bringing together children, teachers, and community presenters in a celebration of the future. But there are some in attendance who reject McDonald’s bright vision.

A principal with a secret. A husband with a murky past. A cop with too many questions. A kid under pressure to prove himself. A girl struggling to escape a mother’s history. A young basketball player with an affection for guns.

Even the school janitor has a story he dare not reveal.

But no one at the gathering anticipates the shocking turn of events that will transform a day of possibilities into an explosive confrontation.


I've read several of Laurie R. King's other books so I was happy to pick her up again.  I liked how a few of the characters from one of her other series made a guest appearance in this book.

Everyone has secrets.  From the Principal to the Janitor, from the cool kid to the awkward everyone has something they hide.  Learning pieces of everyone's back story in alternating chapters really developed all the characters and made me start questioning what was going to happen.  I was pleasantly surprised it was not at all what I expected but good none the less.

This is not a fast paced book but rather a slow burning build up to its climax.  While I really enjoyed it I can see why others may not have been as engaged.  There are a lot of characters and a lot of things going on in this school. This is a school riddled with crime and now a missing girl. The new Principal comes in to try to clean it up and improve the situation even holding a career day for the kids so they can see the some of their options other than sports.  I think if there were a few less plot lines this may have been a better book.  It wasn't confusing to me but I started to get invested and wanted to know more about certain characters only to have to move on to another before I was really satisfied.  While some may think of this as a good thing I think it held the book back a bit.

Disclaimer: I received this book from the publisher through netgalley.com in exchange for an honest review.