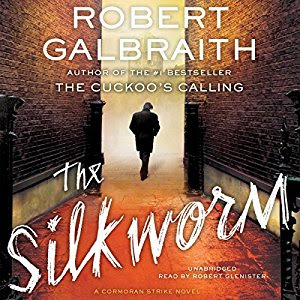 When novelist Owen Quine goes missing, his wife calls in private detective Cormoran Strike. At first, Mrs. Quine just thinks her husband has gone off by himself for a few days - as he has done before - and she wants Strike to find him and bring him home.

But as Strike investigates, it becomes clear that there is more to Quine's disappearance than his wife realizes. The novelist has just completed a manuscript featuring poisonous pen-portraits of almost everyone he knows. If the novel were to be published, it would ruin lives - meaning that there are a lot of people who might want him silenced.

When Quine is found brutally murdered under bizarre circumstances, it becomes a race against time to understand the motivation of a ruthless killer, a killer unlike any Strike has encountered before...


This is a good detective series written by JK Rowling under the pseudonym of Robert Galbraith. I listened to The Cuckoo's Calling before realizing that these were written by the Harry Potter author and I loved it.  I like Silkworm as well although not quite as much as the first one.  I felt that this book was a little harder to follow with too many characters and suspects that I tended to get a little lost.

The first half of the book was a little slow in building but once Cormoran gets ahold of Quine's unpublished book Bombex Moray, things really start to move along.  Dissecting the different characters in the book and where Quine could be.

The tension between Robin and Strike grows in this book.  Robin wants Cormoran to teach her to be a private detective despite her Fiances objections. Cormoran wants to help Robin but is hesitant to get between Robin and her Fiance.  Cormoran is also suffering with prosthetic which got a little annoying.  It seemed like every 10 minutes he was bellowing about the pain.

Silkworm is filled with odd characters in the publishing world whose only goal seems to be, to see their words in print. They are all very eclectic, volatile, and almost all had reason to "help" Quine disappear.

I really enjoyed Robert Glenister's reading of this book.  I often felt that there were actually more than one actor reading instead of just the one I got so lost in his voices and ability to switch his accents and voice.