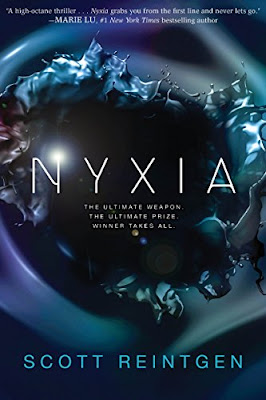 Emmett Atwater isn’t just leaving Detroit; he’s leaving Earth. Why the Babel Corporation recruited him is a mystery, but the number of zeroes on their contract has him boarding their lightship and hoping to return to Earth with enough money to take care of his family.

Before long, Emmett discovers that he is one of ten recruits, all of whom have troubled pasts and are a long way from home. Now each recruit must earn the right to travel down to the planet of Eden—a planet that Babel has kept hidden—where they will mine a substance called Nyxia that has quietly become the most valuable material in the universe.

But Babel’s ship is full of secrets. And Emmett will face the ultimate choice: win the fortune at any cost, or find a way to fight that won’t forever compromise what it means to be human.

I was so excited after reading this book.  Finally publishing has caught on to the concept of diversity. There are characters of all different races and the main character is an African American boy named Emmett.

Reintgen has written a fabulous book.  I was drawn in immediately. This book starts out strong and gets stronger and stronger.  I couldn't put it down and the ending! Omg. When Emmett and the others are recruited by Babel Corp to go to Eden they had no idea what they were in for.  Babel Corp is not all that it seems and is definitely hiding things.

Emmett and the others are pitted against each other in a form of the Hunger Games and the strangeness of Nyxia.  They are trained to fight, to mine and control Nyxia. They learn about Eden and the people who live there but all for what purpose? The unknown motives of Babel corp remind me of the movie Avatar. Is Nyxia special to the people of Eden?  What is Babel really doing on Eden? What are the people of Eden like? So many questions! I hope book 2 doesn't take too long to come out.

I would definitely recommend this book to anyone.

Disclaimer: I received a copy of this book from the publisher through netgalley.com in exchange for an honest review.