ARC Review: The Best Kind of People by Zoe Whittall 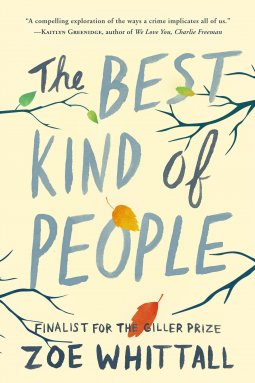 The Woodburys cherish life in the affluent, bucolic suburb of Avalon Hills, Connecticut. George is a beloved science teacher at the local prep school, a hero who once thwarted a gunman, and his wife, Joan, is a hardworking ER nurse. They have brought up their children in this thriving town of wooded yards and sprawling lakes.

Then one night a police car pulls up to the Woodbury home and George is charged with sexual misconduct—with students from his daughter’s school. As he sits in prison awaiting trial and claiming innocence— is it possible?—Joan vaults between denial and rage as friends and neighbors turn cold. Their daughter, seventeen-year-old Sadie, is a popular high school senior who becomes a social outcast—and finds refuge in an unexpected place. Her brother, Andrew, a lawyer in New York, returns home to support the family, only to confront unhappy memories from his past. A writer tries to exploit their story, while an unlikely men’s rights activist group attempts to recruit Sadie for their cause.

I'm really not sure if I liked this book or not.  George Woodbury, the hero of the town is arrested and charged with sexual misconduct with a few female students at his daughters school. But this isn't a book about George its a book about the rest of the Woodbury family and how they deal with what is happening in their world.

I really struggled with a lot of the characters actions. I would think that the family of a man who has always shown up as an upstanding guy would aggressively defend him unless faced with actual evidence of wrong doing. But Sadie and Joan seem to not really believe him but also flip flop on it, while a lot of the town is behind him. I understand that there would be some flip flopping but I would think that at least in the very beginning they would all pull together and fight this but instead its like things just happen to them.  They seem to take on that victim role and not ever really leave it. I saw some backbone growing midway through the book when one of the characters starts to get angry and take a stand but it quickly dwindled.  This is the kind of case that pits people against each other, they take sides but it seemed like no one wanted to take a stand in this case, the only angry people seemed to be Andrew and the few townspeople that weren't backing George.

Sadies brother, Andrew lives in NYC with his partner, has a love hate relationship with his home town where being a gay teen was not always easy.  When he was in high school he had an affair with one of his teachers but no one in the book seems to think this is wrong which I just don't understand. In fact I think that would cause even more chaos in this town then what is going on with George. A homophobic town learning that a male teacher and male student were sleeping together? The town would have blown up. the school would have been under major scrutiny with two teachers being accused of misconduct but no it doesn't seem to be a big deal.

Andrew, who is an attorney does try to help his father I never really got a sense of their relationship. Andrew just seems lost and adrift, his family torn apart but ultimately I wonder if what happened when he was a teen isn't still effecting him into adulthood just as Whittall alludes to what happened to another young girl and an older man effecting her life as an adult.

So while there were a lot of interesting pieces to this book I just didn't feel it had the energy or the passion I see surrounding these cases. There were loose ends and pieces that didn't fit.  It sort of fell flat for me and the epilogue while it tied things up, it was a little too neat.